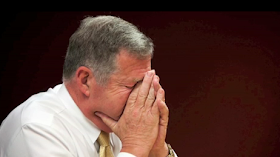 A Pennsylvania pastor was caught red-handed last week in a 5-year lie about his past as a Navy SEAL.

The Rev. Jim Moats of Christian Bible Fellowship Church in Newville, PA had told people in his congregation that he served as a Navy SEAL in Vietnam. After Osama bin Laden's death last week, Moats' local paper did a story on his supposed military career involving Navy SEALS service in Vietnam.

To Moats' credit, he did own up to it, and he confessed and asked for forgiveness publicly. Unlike Ergun Caner who was exposed last year for his decade-long deception of being raised in Turkey, Moats didn't remain silent. He didn't depend on his friends to defend him and attack those who pointed out his deceit. Moats didn't say that Satan was attacking him, or that the story was concocted by a bunch of Calvinists trying to bring him down. But then again, Moats didn't have high-profile pastor friends who helped push his story either.

After what evangelicalism went through last year with the Ergun Caner fiasco, this sort of story is not surprising.

But what IS surprising about this story, is what the Navy expert who busted Moats had to say about these kinds of liars, and also what law expert Jonathan Turley said.

Here are quotes from Don Shipley a retired Navy SEAL who runs a website called Extreme Seal Experience, which in part is set up to expose liars who claim to be former SEALs.

"We deal with these guys all the time, especially the clergy. It’s amazing how many of the clergy are involved in those lies to build that flock up."

"Pastors are common impostors. So are sheriffs. Politicians get caught boasting about medals they never received. Several impersonators were booted from boot camp, dishonorably discharged....Many never served a day in the military."

How sad that pastors are known as the worst offenders. This likely has to do with how pastors do a poor job of policing themselves as we saw in the Ergun Caner disaster. Pastors and law enforcement leaders are the worst, says Shipley. Last year I compared the Ergun Caner saga to that of Gainesville, FL police chief, Waylon Clifton, who was found to have exaggerated his life story by telling of his days playing football at Alabama for Bear Bryant. Someone finally investigated, and he was found out.

Also from the article about Shipley:

"Shipley and other retirees use YouTube, Facebook, and military sites, such as pownetwork.org, to get the word out. As soon as a news article hits the wire, they mass distribute — outing the phonies in a virtual form of street justice. 'We don’t just go around punching these guys in the nose anymore,' he said. 'The pen is mightier than the sword.' "

Amen. The playing field is evened, and lying pastors are found out. Pastors might have the mike for 45 minutes on Sunday with no rebuttals, but the Internet allows their sermons to be listened to and stories checked, and lies and deceptions exposed.

"Until Shipley told him, Moats said he was not aware of the Stolen Valor Act, a federal law that had made it a crime for someone to wear military medals he had not earned or to otherwise misrepresent service in the U.S. military. The law has been declared unconstitutional as a violation of freedom of speech. Shipley said even if the law was binding, he would not favor prosecuting Moats. The pastor has been outed through the Internet in what Shipley said is a form of street justice.

"Jonathan Turley, a professor of law at George Washington University, said the majority of people who lie about military ranks and honors do it for the money. ...'Faux warriors often buy medals on the Internet,' Turley said. 'Some can’t resist buying more and more medals until they look like a Soviet general. ... It’s tragic. These are people who are desperately seeking recognition of this kind.' "

And Turley summarizes it very well, at least what SHOULD happen to ministers when they have been found to be repeating lies about their past to make them seem greater than they are:

"And for a minister, it should be rather devastating to have perpetuated such a terrible lie. That’s a significant punishment. ... Many of these people have a desperate need for public adoration and respect, and when uncovered they become social pariahs and pathetic figures — truly their worst nightmare."