Jacksonville Baptist Pastor Denies Voyeurism - "I Did Not Videotape That Woman"....And Has the Gall to "Forgive" His Accusers 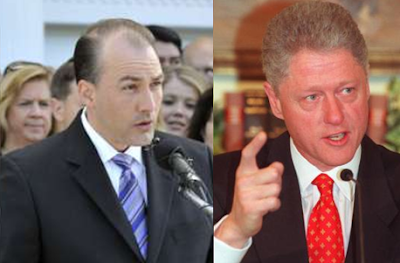 "I did not have sex with that woman, Ms. Lewinksy." Bill Clinton

"I did not have a homosexual relationship with a man in Denver." Ted Haggard

"I categorically state that I am innocent of the allegations of video voyeurism." Greg Neal
--------------------------------------
Pastor Greg Neal of Berean Baptist Church showed the world today why so many people can't stand fundamentalist baptist preachers and their followers. They behave like politicians when caught in sin, and will look right in the camera and proclaim their innocence in the face of insurmountable evidence of their guilt.

Standing in front of the news cameras, with his sheep behind him nodding like bobble heads chanting "Amen!", he proclaimed his innocence of video voyeurism, blamed his accusers for the financial ills of the church, blamed the sheriff's office for shoddy police work, and then had the gall to say HE forgives his accusers.

The only thing Neal didn't say was he was still looking for the true voyeur that snuck into his office that day, set up the camera on his desk, filmed the girls while they undressed, and by chance happened to film the innocent pastor as he came in and moved a stack of papers from in front of the camera. What terrible luck, to have somebody videotaping naked girls in your office, and you accidentally get caught on the same video!

Same old story here. When the pastor gets caught with his pants down (figuratively, although sometimes literally), the pastor proclaims his innocence, does his best not to talk to the authorities, and the peeps rally around their "man of God" and make him to be the victim, then they turn the tables on the victims and those that reported the crime as though they are the perpetrators. The pastor then turns around and blames the people who did right by going to the authorities as though they are doing the work of the devil, trying to destroy the church and all the good they have done for Jesus.

The best news from Neal's press conference is when he said that 100's have left the church and school since the story broke - although that too, was blamed on the dastardly recalcitrants who went to the cops with the evidence. Said Neal's father co-Man-of-God at the press conference:

"Your accusations have hurt your former church family, and your slander that you continue to participate in not only hurts the church, but the community it serves. You...should...be...ashamed."
No, Pastor Neal, YOU should be ashamed. You denied the existence of the tape for years, and when finally someone at your church did the right thing and took the evidence of the crime committed in the pastor's office to the police, you have turned on your own members who obeyed the law and acted to prevent perhaps more crimes, and you even turned on the police themselves.

But, it is good news that 100's have left, praise Jesus for that. If the Neal's stay at the helm of Berean, I'll pray for 100's more to come to their senses and leave as well.

At least until the real voyeur is caught.
Posted by FBC Jax Watchdog at 7:18 PM

The pastor in the video is Greg Neal, not Tom Neal, as reported on your blog.

I think the name of the pastor is Greg Neal, not Tom Neal as reported by the Watchdog.

There is a huge difference between fundamental/independent Baptist pastors and Southern Baptist pastors but I would imagine that little detail would continuously escape the blog writer.

It is kind of interesting that you always champion the "recalcitrants" and seem to equate that with being a hero. I hardly think so.

Please explain the differences between southern baptist pastors and independent baptist pastors when it comes to how they handle matters such as sexual abuse or sexual perversion such as this. Would love to hear it.

Of course, Steve Gaines and Mac Brunson might be Fundamental Baptist pastors in hiding.

Wow. So this guy had some really bad enemy that framed him? If so, why is he not crying (seriously)and vowing to find said enemy? If someone really set you up like that, you'd be beside yourself, telling the world of your innocence.

Wouldn't the evidence against him be circumstantial evidence-which is very common in cases? When everything about the crime points to you, you say, "Actually, no, no, it wasn't me!" I guess the idea is to plant doubt in the minds of those looking at the plain evidence. Like if you're caught in the very act of adultery, you should still DENY IT. Tell the viewers to throw out what they are seeing right in front of them.

I think what shocks us is that liars lie-and they are very good at it. I've had it happen to me personally-someone telling a complete lie, looking directly into my eyes (camera). It can be very convincing. But you have to remember they are good at lying. People bad at lying don't get away with stuff.

So the big question is who is this very evil person that went to the trouble to make the videos, plus make it look like the poor innocent pastor actually made them??

Sharon - precisely. And I would add he never mentioned the true victims - which were young women who were videotaped undressing in their pastor's office! They are the victims, not the pastor and his church and their precious revenue stream. The leaders of the church knew the tape existed years ago, and no one did the right thing for 9 years or so and went to the authorities with the evidence of a crime. Thus, someone at the church, who had access to the pastor's office, was roaming the church undetected for 9 years.

But what is more disturbing to me than the fact that he lies - of course, he is protecting his job - is the people in ties and dresses standing behind him nodding their heads and yelling amen (although they were much more subdued when he said he forgave the accusers - the bobbleheads didn't seem to like that too much). The pastor used his sheep as props in the cover up of his own sin, they all together blamed people who did the right thing in going to the police. Another example of a slacking shepherd, more concerned with his rear end than the sheep.

I liked the picture in the paper today of the protestors yelling at the pastor from the adjoining property and holding signs. One of them was a picture of the Kool Aid man with a no symbol across it. Indeed, those folks need to get off the Kool Aid.

Are we not innocent until proven guilty?

What IF he IS innocent?

Amanda Knox was just let go for crimes she did not commit.

The Devil is after our Pastors. He IS the accuser of the Brethern.

I apologize to you Pastor Neal for this defamation of your Character.

Hold your head up my Brother, your redemption draweth nigh.

I still think there's more to the story. It probably wasn't just the Pastor making and viewing the tapes, but several persons. Sounds like there was a falling out between these persons, and then, 9 years later, one or more of them turn the Pastor over to the police. These people need to get out of the church business. They're more suited for Jerry Springer or Judge Judy......sheesh.

That is what incorporatrion of church will eventually come to. It may not always be seen because the structure is so good. We should not be alarmed by this.

Visit the website that highlights baptist (YEs even SBC ministers) who have been arested for such crimes and worse. SBC is NOT immune from such issues. When i was in seminary we had MANY theology students attend our sexual addiction therapy groups. I was one of the counselors for those groups.

Yes, the people behind him just seem like gullible people who are being loyal to someone who's not worthy of their loyalty. Those who have left have demonstrated they still have some ability to evaluate and think through the situation.

You must be so proud, WD. The lineup of freaks and whack-jobs attracted to your blog is fun to follow. The nonstop display of ignorant rants and psychotic retorts is hysterical. Jerry Springer had nothing on you :) "christian" entertainment at its finest!

While it does seem like the evidence is there, a commenter had it right. What if he WAS framed? On the news, it said he willingly took a polygraph test and passed. I sure don't know. Since you don't know for sure, are you willing to entertain the possibility? Or do you feel you know for sure. You are awfully quick to judge. Are you judging so quickly just because he's a pastor? What if this was some random person? Again, I agree the evidence doesn't look good for this guy, but I sure would hate to be in your shoes if you were ever set up and someone was out there trying to kill your character without facts. Actually I do remember you mentioning something a while back claiming to be lied about. My point is you need to be careful. You're coming across two-sided.

Yes, he could have been framed. And someone else might have killed Nicole Simpson. The probabilities are very, very low, given the evidence and the behavior of the accused in both cases.

What the pastor doesn't address in his news conference is why they did not go to the authorities in the first place, why they didn't admit to the existence of the tape for years. If someone had snuck into your own office, set up a video camera, video taped young girls getting undressed, and then had the audacity to film you at the beginning and end of the tape - and then you FOUND the tape, would not you go to the authorities? A crime had been committed.

If he was framed, and if he is going to bother holding a press conference, he should have explained that.