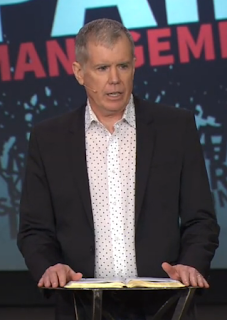 Tracy Barnes is one of the pastors at Ed Young's Fellowship church. I urge my readers to listen to his sermon last week. I wish I could embed it here on the blog, but the best I can do is give you the link here:

Tracy spoke last week in the current series "Pain Management". Tracy's family has endured the incredible hardship of having their two young boys - Roger and Phillip - diagnosed with Duchenne muscular dystrophy back in the late 1980s. This awful disease causes a wasting away of all muscles. It is diagnosed when children are very young, and death usually occurs around age 20 to 25 from respiratory complications. Their son Roger died a few years ago, but Phillip is still bravely living with this disease, with the love and constant help of his parents.

In the sermon Tracy speaks from his heart to help people deal with painful life trials that have no end in sight. He gives three "stop signs" to help people live with joy despite living in a life-long struggle. A video is shown early in the sermon of how Tracy's wife Debbie has endured, her devotion to Phillip's care, and she speaks of her faith struggles and victories.

If you are dealing with long-term struggles and disappointments in life, Tracy and Debbie's story and the lessons Tracy shares in this sermon will be of great help.

There are so many touching parts of this story that will help you - from Tracy and Debbie's devotion to their boys, to the story of one of Tracy's daughters carrying the gene who decided to adopt a child from Haiti vs. birthing children, to seeing Tracy speak a word of encouragement and love directly to his son Phillip.

Thank you Tracy and Debbie and Phillip for telling your story. One of the most moving, touching, helpful sermons I've seen.

I hope my readers will take a few minutes to watch this.
Posted by FBC Jax Watchdog at 11:52 AM 6 comments 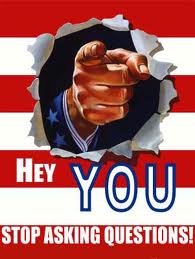 Readers - it is hard to believe another SBC mega church has banned a long-time church member for daring to demand questions of its leadership through social media.

Sound familiar?Don't these guys learn from each other's mistakes in how they try to bully critics and questioners?

At Prestonwood Baptist Church, a long-time church member - an educated, professional, family man - recently became aware of the church's non-reporting of molestation of  several young people at the church at the hands of John Langworthy of Prestonwood back in 1989. Brett Shipp of WFAA covered the story here, and ABP covered it here. I wrote about the Prestonwood/Langworthy scandal here, here, and here.

This church member then did the unspeakable - he dared to use social media to ask questions of his church leadership. He had questions like, presumably, why did the church leadership NOT contact the police so they could investigate? Did the church warn the next churches or schools that Langworthy went to work at? This church member posted a few posts on the church Facebook page, which were promptly deleted. He then called the church to schedule a meeting - but it was abruptly canceled, and when he showed up at the church anyways he was turned away and told he was no longer welcomed at his church. You can watch the video of his visit to the church here, and you can visit his Facebook page here. You can follow his Twitter feed here.

The church then played the "he might be a threat" card by filing a "Suspicious Person Report" with the local police. Sound familiar?

Prestonwood knows this man and his wife and kids. They know he is not a threat. They even know his questions are completely legitimate. But they would rather ban this man from his church, disrupt his family life and punish he and his wife for asking questions. Are they worried how this will affect this man's wife and children to have their husband and father banned from their own church under threat of arrest - just for asking questions of the holy man of God and his friends?

The Wartburg Watch is going to cover this story more in depth tomorrow, so stay tuned.

I hope this church member continues to use social media to expose their attempts to bully him and intimidate him, and more importantly shine more light on the Prestonwood/Langworthy scandal.

But how ironic is this: Prestonwood apparently did NOT issue any trespass papers or "suspicious person's report" against Langworthy when he was found to be touching young boys at the church....but let a church member ask questions about how they handled the Langworthy case, and HE gets the boot.

Don't report the molester to the cops...but report the "suspicious" church member who wants answers to his questions.

Can things get any crazier in the Southern Baptist Convention?
Posted by FBC Jax Watchdog at 12:01 AM 44 comments 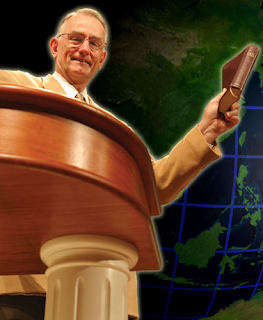