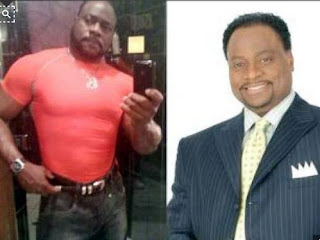 "Bishop" Eddie Long, the pastor of the Atlanta megachurch New Birth Missionary Baptist Church, has died. It seems Eddie died after a brief fight with an aggressive cancer.

Most of the national media reports of his death include mention of the 2010 scandal involving the four young men who claimed the good Bishop groomed them through their youth and used them for his homosexual sexual gratification. True to form of these mega church pastors caught with their pants down, Eddie's victims were paid off with funds from the ministry and he continued as a spiritual guru to thousands of gullible church members.

The Watchdog did write a few articles about Long and his scandal, and some of the disgusting responses to the scandal. I wanted to post links here to two of these articles.

Creflo Dollar Calls Eddie Long's Sexual Predation a 'Fenderbender':  This first was Creflo Dollar's defense of Long's sexual abuse scandal, equating his sexual abuse to simply a "wreck" - like it was all a bad accident that should be overlooked. Creflo characterized Long as the victim of discerning church members who wished to hold Long accountable (sound familiar?). The above link includes the video of Creflo Dollar.

Prepare Ye the Way of the Cult: Eddie Long is Literally Lifted High. This second article was about church service where Long was wrapped in a supposedly 300 year old Jewish scroll, and proclaimed to be a king and given a crown and lifted high on a thrown and paraded around the church. If you didn't have the video to watch, you would never believe me. Again, read the Watchdog article, and see the video at the link above. It is a good reminder of just how demented people's minds have to be in order to be duped by the nonsense slung by Long.

Long was a despicable human being for sure. He used a perversion of Christianity to get his hands on people's wallets and their genitals. But those who supported Long with their money and love and adoration also share in the blame - they helped form this man into who he became and granted him the power and provided the venue for his abuses.

The good news is that over the years as Long's generation passes, I believe the Millennials will not be so gullible. They have access to blogs and social media which help shine a glaring light on the actions of these charlatans. Most major denominations see this declining trend, and there is not much they can do to reverse it except to market their nonsense to the uneducated and insecure.

I am glad THIS blog was part of the cataloging and analysis of just a small part of the abuses of supposed men of God who use their religion to abuse good people through over six years of blogging and over 600 articles and hundreds of videos documenting it.

Did I just say that? You better believe I did.
Posted by FBC Jax Watchdog at 11:01 AM 3 comments