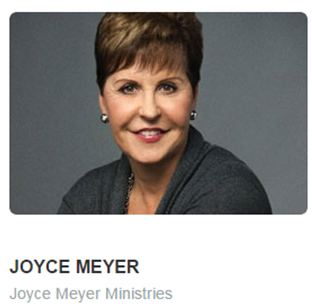 This says it all about the state of evangelical Christianity in Jacksonville: the largest and fastest growing church in our city, Celebration Church, is having none other than prosperity preacher/millionaire Joyce Meyer in to speak at a conference.

Do we really want Joyce Meyer here to speak in our city? Meyer and her money-making enterprise (known as her "ministry") were investigated by Senator Charles Grassley's Senate Finance Committee back in 2007 and 2008 for possible tax violations. Grassley focused on whether Meyer and five other "ministries" improperly used their tax-exempt status as churches to lavishly enrich themselves and their families.

It is a travesty that Stovall brings Joyce Meyer to our city. She represents everything that is wrong with evangelical Christianity. Her board is made up mostly of family members. Most of her kids and their spouses are on the payroll. She has a net worth of around $25 million and her ministry spends a tiny fraction of their revenue on actually helping anyone.

But I've said it here multiple times: Stovall himself preaches a prosperity gospel, so this doesn't come as a complete surprise to the Watchdog. 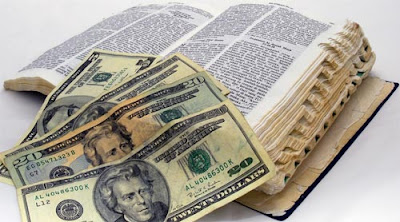 The translation is called the "Revised Storehouse Tithing Bible", or RSTB for short.

"We have sought input from some of the best fundraising pastors in modern evangelicalism to provide this valuable resource to pastors as they teach the sheep the absolute necessity of forking over a minimum of 10% to their local church", said a Lifeway spokesman.

Contributors to the RSTB include Steve Gaines, Ed Young, Frank Page, and also John Hagee. Robert Morris, best-selling author of The Blessed Life and storehouse tithing teacher, was the editor of the project.

"Tapestry of Green" on Every Page of the Bible

Lifeway says the RSTB will help church members see that tithing really is a common theme found throughout the Bible.

"Just as the tapestry of red, Christ's redemption, is found throughout scripture pointing us to Jesus Christ, so on every page of the Bible we find the first-fruits storehouse tithing principle, the blessed 'tapestry of green', that points Christians to securing God's blessings and avoiding God's curses through giving the first 10% of our income", said one of the RSTB editors.

The RSTB has several unique features: it is color coded - verses having to do with storehouse tithing are highlighted in bright money-green. Also, unique tithing icons are used throughout, such as those highlighted verses that refer to Christians getting blessings for their tithe are marked in the margin with "$" symbols, while those that speak of God's curses for not tithing are marked with either an icon of a purse with holes in it or a devil's pitchfork.

To help Christians fully understand how important it is to tithe to avoid the wrath of God, the RSTB includes modern-day translations of verses dealing with first-fruits tithing principles that have been uncovered in scripture by the today's evangelical tithing experts.

For instance, when Jesus preached in the Sermon on the Mount:


"Seek ye first the Kingdom of God, and all these things shall be added unto you" (Matt 6:33, KJV)

has been translated with the help of Perry Noble to read:

"Tithe ye first to your storehouse, and money, clothes, and food shall be delivered unto you." (Matt 6:33, RSTB)

Another great example of interpreting Jesus' words in the context of modern day storehouse tithing doctrines, is Matthew 23:23:


"Woe to you, teachers of the law and Pharisees, you hypocrites! You give a tenth of your spices—mint, dill and cumin. But you have neglected the more important matters of the law—justice, mercy and faithfulness. You should have practiced the latter, without neglecting the former." (Matt 23:23, NIV)

which has been shortened through translation, with the help of Frank Page, to read:


"Woe to you, you non-tithing Christians, you hypocrites! I've paid for your sins and delivered you from hell, now PONY UP!!!" (Matt 23:23, RSTB)

Steve Gaines has been on the forefront of the storehouse tithing interpretation in the New Testament, and helped correctly interpret the Acts 5 account of Ananias and Sapphira. Some of the translated verses include:


"But a certain man, named Ananias, with Sapphira his wife, sold a possession and did not tithe on it....and Peter said 'Why hast thou conceived this thing in your heart? You have not lived in a stolen house and driven a stolen car belonging to men, but thou hast sent thou offspring to school with the tithe belonging to God.'....and Ananias, hearing these words, and Sapphira with her stolen jewelry, fell down and gave up the ghost and the tithe." (Acts 5:1-5, RSTB)

"A tithe of everything from the land, whether grain from the soil or fruit from the trees, belongs to the LORD; it is holy to the LORD." (Lev 27:30, NIV)


"A tithe of everything in your paycheck, whether it be your salary from work, or the hourly pay at your second job; even your welfare or social security checks, - they all belong to the church, it is holy to the church." (Lev 27:30, RSTB)

Lifeway acknowledges that the RSTB will have its critics, but that these are mostly recalcitrant bloggers who don't tithe anyways.

One such critic, FBC Jax Watchdog, says he offered the RSTB translation team a helpful modern day translation of Malachi 3, saying that it is the most misused verse in the bible on storehouse tithing.

"They weren't too interested in receiving a modern-day translation of Malachi 3 that reflects how God would apply it today to the church", said the Watchdog. "You see, what the storehouse tithing preachers don't want you to know is that the book of Malachi was directed at priests of Israel and the sons of Levi. So in Malachi 3 God is upset that the priests, not the people, are misusing the tithe and thus robbing God."

The editors instead went with the Perry Noble translation of Malachi 3:10:


"Fork ye over all the tithes to the church, that there may be large budgets in mine house, and prove Pastor now herewith, saith the LORD of hosts, if I will not open you the bank account of heaven, and pour you out money to pay your bills, so much that there shall not be room enough to store it and thus you'll have to give even more to the church." (Mal 3:10, RSTB)
Posted by FBC Jax Watchdog at 9:15 AM 19 comments