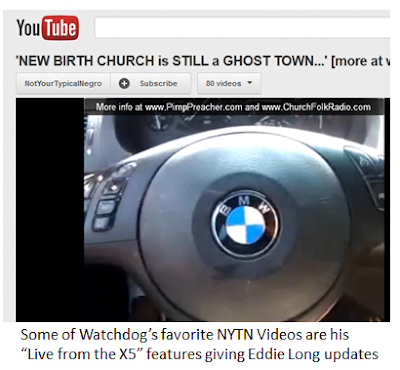 "I give thanks to God and of course to my friends people who have prayed for me, supported the channel...I say it is a victory for free speech...hopefully the action that I've taken [suing YouTube to restore his account] along with the support of others will help to make YouTube a better place...goes to show that when you believe in something and consider things prayerfully and stand by what you believe in and act on that you can be successful to a certain degree." Kevin Oliver on successful restoration of his YouTube account after a year long battle.
-----------------------

I am very happy to report today that Kevin Oliver of Atlanta, Georgia, a Christian video blogger who blogs under the name of "Not Your Typical Negro" (NYTN), has successfully sued YouTube to have his YouTube account restored. As of this morning, Kevin's account is back up and all videos operational!

Kevin briefly tells his story in this video, the first one posted on his YouTube account in nearly a year since his account was deactivated. But here is Kevin's story:

Kevin started his video blog back in October 2007, about the time yours truly started this blog, and his blog like so many other Christian blogs was born out of his experience at a church of what we'll just call ministerial "betrayal". Kevin produces YouTube videos analyzing abusive pastors and false teachings in churches. He has produced at least two hard-hitting videos concerning issues raised on this blog and my First Amendment lawsuit against the city of Jacksonville and what Kevin calls "church mafia tactics". Kevin also contributes to the Internet radio show Church Folk Revolution.

But last June, Kevin produced and posted a rather famous video of Creflo Dollar - in the middle of the Eddie Long scandal - telling Eddie Long's church members to go back to their church because Eddie Long has "insurance". And in the video, Dollar compared Long's sins of sexual relationships with multiple male church members as simply "a wreck" and that Long is still "anointed". The video went viral, but in a few days, Kevin's account was disabled by YouTube with a standard post saying Kevin's account was suspended for "scams, spam, and deceptive
content". Below is Kevin's Creflo Dollar video:


After attempting to contact YouTube through the "regular" channels and getting nowhere - even after visiting the YouTube corporate headquarters, Kevin filed a lawsuit in Santa Clary County in early May. Kevin's suit included four basic causes of action including defamation and breach of contract. Kevin did the research himself on how to file the suit, and with the help of some friends he filed it on his own.

In just a few days he was contacted by a lawyer representing YouTube to negotiate a settlement, and eventually favorable terms were reached and his account was restored. He eventually received an explanation as to why his account was taken down for over a year, and it really made no sense, and apparently it had to do with "metadata" and "tags" Kevin put into the description section of his video posts. That seems odd, and it is even stranger considering it was the viral Creflo Dollar video that was the last one, and that it took over a year for his account to be restored.

But "Not Your Typical Negro" is back online, and kudos for Kevin sticking with this and successfully using the legal system to stand for his First Amendment rights. I'm sure that all the pastors who are featured on his videos won't be happy about his account being restored, but I look forward to more of Kevin's excellent videos.
Posted by FBC Jax Watchdog at 8:43 AM

I am very happy that Kevin Oliver has prevailed against Youtube. I honestly did not expect him to succeed, for Youtube has become dictatorial in it's policy of nuking users. In lot of ways the victory of Kevin Oliver and Tom Rich are refreshing, given the way this country has gone to shredding both civil liberties and the constitution since 9/11.

EFF > When the Government Comes Knocking, Who Has Your Back?.

YouTube: Removing the need for elders to hold their own pastors accountable one video at a time.

Yep, it seems to always be the same message from preachers: "If you criticize me, there's something wrong with you and you better get right with the Lord!" Notice how Dollar doesn't want to discuss what Long did wrong. Nope, can't go there. Just forgetaboutit! And talks about Long "caring." Seems like that is rewriting history. Dollar is up there doing a one-way conversation. Everybody else is supposed to sit and listen and obey.

Anyway, good for Kevin and more power to him!

I love how Kevin points out the emotional manipulation. That is excellent.

Like calling it a "wreck," makes it sound like some awful thing came out of the blue and harmed Long! It's truly absurd!

Glad to see that he is back on You Tube.

Thank you, Tom, so much for your support. And truth be told, I was actually inspired by your diligent work and perseverance throughout your own battles with FBC Jax.

And truth be told, I was actually inspired by your diligent work and perseverance throughout your own battles with FBC Jax.

Amen. WD has indeed been an inspiration to all of us.


"WD has indeed been an inspiration to all of us."

"All of us?" Not so fast Peace boy

Way to go, Kevin! Thanks for standing for our rights of free speech. We all owe guys like you a lot!!!!

New reason for "Why Churches Die: The laymen view."

1.) Pastors that preach such nonsense that their views cannot hold up in the arena of public discourse. Therefore,...

2.) they have to worry about any ONE person who challenges their nonsense on the internet and try to minimize or discredit this nobody, usually anonymous, voice.

3.) They have all the fame, money, power and influence that their position and title and marketing budgets give them, not to mention the microphone week after week, and yet...they can not tolerate even a layman's response or question. Hmmmm. Perhaps this is why churches are dying.

Second reason: Unsustainable budgets (like the housing bubble that burst) that eventually must correct.

This pure speculation on my part, but an informed one. The police, FBI, DHS and all the internet companies wash each other hands and they do work for each other. And they are linked with various backhand connections. Could it be that the police officer close to Creflo who threatened Kevin contacted Youtube via some contacts and pressured youtube into this? To clean up the mess, youtube lawyers give a spurious reason of tags and meta data that Kevin used on his videos that is the cause. Come on. Sell me the Brooklyn bridge youtube.

creflo dollar got arrested for choking his daughter this morning according to twitter.

I love it when freedom of speech prevails! Way to go Kevin Oliver.