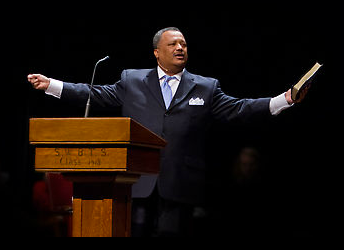 Fred Luter, president of the SBC, said in an interview last week that perhaps one of the reasons North Korea is now ramping up their nuclear program is because God is judging America for the U.S. Supreme Court debating the issue of gay marriage.

Listen to the radio interview excerpt below. It is shocking. Rick Wiles asks Luter if North Korea's renewed military aggression is God "unleashing" punishment on us. This is the level of nonsense that is driving young people away from Christianity, when they hear a prominent Christian leader like Fred Luter insinuate that God is judging the United States over the issue of gay marriage.


There are plenty of reasons why a person might be in support of the 1996 Defense of Marriage Amendment. But to take two events that are completely separate and distinct and link them into a cause and effect relationship using the "judgment of God" hurts the right's cause.  And it is why non-Christians actually FEAR evangelicals - our "men of God" think we're so stupid as to believe God is judging us because this week our Supreme Court happens to be considering the issue of gay marriage.

So come on, Christians - let's save America from North Korean aggression by opposing same-sex marriage - and be sure to tithe this week to stop homosexuality from spreading.

And if the Supreme Court strikes down DOMA - everybody head for the bomb shelters.
Posted by FBC Jax Watchdog at 7:34 AM

There are many things I would like to say about this, but let me go in this direction. One of the things I do is embrace the burden of proof and provide hours of documentation of Ergun lying to people (complete with transcription a lot of the time). This is considered insufficient positive evidence by guys like Luter (at least to publicly warn people).

However, when there is the flimsiest connect the dots, people publicly say that God's hand might be in something. I remember as a kid thinking that God was trying to communicate to me through my 56K modem's fickle internet connection. I stopped trying to read circumstances like tarot cards and tea leaves a while back.

Perhaps God is judging us because DOMA violates the "full faith and credit clause"...sarcasm.

I would ask you, has God judged entire civilizations in the past because of their sin? Soddom and Gomorrah, Rome, Israel, Babylon. While i don't think that we can point to one specific sin and say this is why America is being judged, but could it be true that the seemingly bleak future of America is because of sin?

Perhaps it was the repeal of prohibition that caused Hitler to rise up and kill millions.

Why postulate a correlation when no evidence for one exists?

I promise I will tithe on the large revenue.

meanwhile, the SBC lets Perry Noble and Ed Young Jr. and Rick Warren dumb down the SBC and lead many astray with goofy and outright false teachings.

God will IMO bring Judgment to SBC denom. for enabling creeps like Young and Noble and Warren

Luter back-pedaled on his previous statements this evening on the Anderson Cooper show.

I think God's judgement on this country is evident by the fact that so many people are still deceived enough to think that the SBC represents Jesus Christ. With thousands of true Christians leaving the institutional religious system, one has to wonder if God is not calling his Lots (righteous men) out of Sodom (institutional churches) and is going to judge these religious businesses.

"Isn't it ironic that the one who accuses others of being greedy appears to be greedy himself?"

Isn't it ironic that you are concerned about pennies and care nothing about "Men of God" who are flying around in private jets and making exorbitant salaries while guilting the followers into supporting their jet-set lifestyles with false doctrine?

Luter is certainly entitled to his opinions. But IMO what he said is just nutty and gives people another reason to ask serious questions about Southern Baptists.

That's why I left that bass akwards group years ago. They think they have all the answers about everything. There is no cure for stupidity.

The Lord is longsuffering not willing that any should perish but that all should come to repentance 2 Peter 3:9. Observe the word "all" which includes Koreans. There are some estimates that there are 100 million Christians today in China that meet in their own homes. Possibly America could learn from China...believe in Jesus, pray for conversions here as well as everywhere.

20 years ago anything that went wrong was blamed on taking prayer out of school.

It looks like gay marriage has taken its place as the main culprit.

If the church focused on doing its job - sharing the gospel in love, taking care of widows, orphans, and the poor, and being salt & light - instead of thinking they exist to judge everyone else, our position in the world might be very different right now.

It seems to matter not that Luter retracted his comments a few days later. He stated them in the first place. We don't need a younger person of a different skin pigmentation parroting Pat Robertson.

In short order, all democracies will ensure that LGBT persons have the same privileges, responsibilities and rights with regard to marriage. This will follow a pattern not unlike that of democracies determining that Luter's ancestors should never have been slaves in the first place.

I must add with what those janissaries did in Boston the last post has a point.