Merry Christmas from the Watchdog 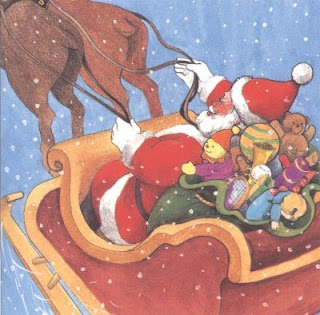 Below is a repost of the WD poem from 2009. I did a remix of it a few years ago, below is the original.

Looking forward to 2014, the 8th year of the Watchdog watching pastors and churches and giving commentary and analysis. I suppose my tagline should be "gathering, condensing, and analyzing shameless nuttery from the SBC and mega church worlds... so you don't have to."

And while some accuse me of only seeing the negative in pastors and churches: it is not true. While shameless nuttery is the focus of my writing on this blog, I have had good experiences in 2013 with several pastors - even a mega church pastor - that has shown kindness and grace to me and my family, and who refuses to beat the sheep like so many other pastors over tithing and instead teaches people to be generous givers. So these pastors are out there, but the Watchdog will keep watching and writing about the others in 2014.


'Twas the Sunday Before Christmas


'Twas the Sunday before Christmas
and all through God's church
"Not a churchman is tithing!"
Yelled the preacher from his perch

So the plates were all passed
down each row with great care,
In hopes that the peeps
Would put their 10% there.

The preacher told them
how dare they not tithe,
Our country's safety at stake,
Else God's wrath would arrive.

Mama in her new dress,
and me in my tie,
I saw that plate coming,
with a tear in my eye.

I took out my envelope,
with my measly 9 percent
knowing I was "sinning",
but had just paid my rent.

Here came the plate,
Put my envelope upside down,
tried to fake a tithing smile,
but wore a 9 percent frown.

Off Deacons, Off Trustees,
please count all the dough
See if there is enough,
for our mega preacher TV show.

The mega church preacher
climbed up into his place
Said our tithe to his church,
was required for grace.

He told of his trip to New York,
how he was doing God's will,
and that we as God's people
needed to pay for the bill.

He invited us with him,
on a Holy Land Trip,
or to sail down the Danube,
on a luxury ship.

He had a broad face
and a little round belly,
That shook when he yelled,
like a bowlful of jelly.

He pulled off his glasses
and gave a jerk of his head,
Soon gave me to know
I had something to dread;

He spoke not from the Word,
and went straight to his work,
Began to tell the non-tither,
how he was a jerk,

He was dressed all in finery,
even cufflinks of gold,
He took out his Bible
and yelled to the fold:

"Now please get out your bibles,
you stupid sheep,
You're holding your tithe back,
you're being way too cheap,

You owe me ten -
not nine, not eight,
And we'll spend it as we please,
you dare not designate."

We thought from our Bibles
he would be sure to show,
How point-one times the gross,
is the exact amount we owe.

But ne'er did he exegete
this demand placed on us,
he just told us to fork it over,
no need to discuss.

He said if we didn't agree,
to "Take it up wit da book",
But he didn't tell me where,
I should start to look.

The white-haired man to my left
held on to his wallet
His trip to church today
he was sure to regret.

"I didn't know it", whispered,
the old man with sweat on his brow,
Then the preacher yelled,
"HA, well you know it NOW."

I told the old man,
after the show,
"Don't worry its not what you give,
but rather its Who you know."

"The message this Christmas, sir,
is God sent his Son,
He's after our hearts first,
Not a wallet, not one."

"Baby Jesus came into the world,
to show us the way,
Not to tell us what percent
to the pastor we must pay."

The old man grinned,
and nodded his head with a smile,
"I knew that, and
I'll see you all in a little while."

"See, at Christmas time,
I've blessed kids with gifts each year,
And not once did I demand
a tithe in exchange for my cheer."

"I find it quite odd,
these men demand cash as they do,
When God gives His love freely,
to me and to you."

But I heard him exclaim,
ere he drove out of sight,
"Happy Christmas to all,
and to all a good-night."
Posted by FBC Jax Watchdog at 12:01 AM

Just cannot keep your word, can you?

Merry Christmas and may God's grace be on us all. Thank you Lord Jesus.

Merry Christmas, Watchdog! Thank you for your ministry!

Hey first poster at 10:00 am - If the shoe fits... I guess you see many traits of YOUR mega pastor here and are assuming the poem is about him. So sad. You must be paid thousands to put up with such a man. Just guessin... Either way, glad you are still reading, even on Christmas morning. Get a life. I feel sorry for you.

Very good, Doggie! I enjoyed it tremendously and want you to keep on keeping on.

@ 939 - Stay on topic. My comment was not about any of the pastors. My comment was directed to a sarcastic - smart aleck. Maybe you can figure out where that shoe fits. Happy New Year!

No, I can't figure it out. You commented on Christmas morning "You just cannot keep your word, can you?" What "word" can't he keep? Am I now a sarcastic smart aleck? Does that shoe fit me? And after two negative comments on the blog, are you sincerely wishing me a "Happy New Year?" or are you the sarcastic smart aleck?

Am I wrong in my assumption that you make your living working for a 501(c)(3) and supporting a charlatan, pompous ass in order to keep your job?

@10:29 - the Happy New Year was sincere. Your assumption is about as wrong as a narcissistic member disparaging his own church.