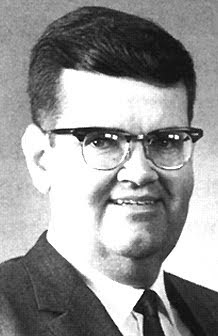 Thank God there STILL are some SBC preachers more like Lindsay, some even at larger churches. It's just that we don't hear much about them - they aren't in power at the SBC and they're not on the preaching circuit - they are busy pastoring their flocks.
Posted by FBC Jax Watchdog at 2:21 AM

Dr. Lindsay's shoes were just too big to fill. He was an obedient servant and loved God, family, and church. It's a real shame a lot of those that heard him did not follow his example which would have made a big difference in todays world.

Reminds me of my pastor when I was a youth here in Texas, Baylor and SWBTS grad, all he cared about was people in his town whether they went to his church or not....( and he had a little thing for Baylor football..😊)

I loved to hear Dr. Lindsay preach. He was old school. I love how he pleaded for souls to be saved.

Here is a link to an example:

I was in the church in those days and this is an accurate description of a man who changed the face of Jacksonville, FL - it hasn't been the same since. Interestingly enough, Jerry Vines couldn't keep FBC moving forward the way Dr. Lindsay did ... The heart of the matter is the matter of the heart. Blessings