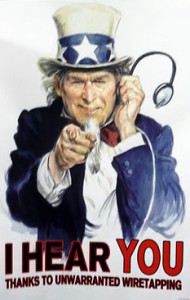 Washington, DC (WD Press) - Sources inside the the National Security Agency (NSA) have contacted WD Press to leak information about what may be the first wiretapped "calls of God" to a Southern Baptist mega church pastor to change churches.

According to the NSA and the the Department of Homeland Security, a pastor surveillance program was initiated under the Obama Administration in 2009 after SBC megachurch pastors began claiming as far back as 2005 that it was God who "called" them to leave a church and go to another one, usually a much bigger one, with ironically always a much larger salary and benefits package.

"If these pastors have a direct line of communication with some sky fairy or higher power that is giving them audible, specific directives, resulting in a great gain in personal wealth and power, it is in the best interests of the federal government to know the details and origins of such communications and how they might be used by other men of God in other religions for nefarious purposes," said the NSA source to the WD Press on Monday.

Steve Gaines, the President of the Southern Baptist Convention, and Lord Albert Mohler of the Southern Seminary, have issued a joint statement condemning the wiretapping program and the latest leak. 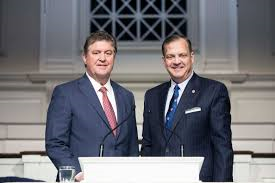 "The communications between God and SBC mega church pastors are private and protected by the first amendment and the oracles of God Almighty and in the matchless name or our Lord Jesus Christ", said Gaines and Mohler. "To think that our godless government under the Obama Administration has been surveilling our trusted men of God should send chills down the spine of every God-fearing American. We call on President Trump and the head of the NSA to put an immediate halt to the pastor surveillance program, and we ask Attorney General Sessions to prosecute the leakers to the fullest extent of the law. "

According to sources inside the Department of Homeland Security, the surveillance program was almost scrapped after only one year due to the logistical challenges presented in capturing many of these "calls of God" to SBC megachurch pastors.

"Some of these 'calls of God' were made while pastors were riding donkeys up the sides of mountains in the Middle East," said the DHS source, "Or while on long sabbaticals where the whereabouts of the pastor were unknown by even their own church members, as the pastors left town unexpectedly for long periods of time."

The NSA leaker has told WD Press the name of the pastor who was "called" by God last week, and the churches involved. At this time, however, the WD Press can only confirm that the call of God did indeed involve an enormous pay increase, a 1500 square foot office, a land gift and interest-free loan to build an 8500 square foot home, and an 8-week sabbatical - at his new position that God "called" him to take.
Posted by FBC Jax Watchdog at 11:23 PM

I think those pastors are receiving FAKE NEWS. It is not God talking to them, it is their ego, a subconscious part of their personality that they mistake for God, because they believe their desires arise from God, not from their own personality! Real FAKE NEWS!

This is satire, correct?