"From the Dog House to the Blog House" - the Watchdog Story 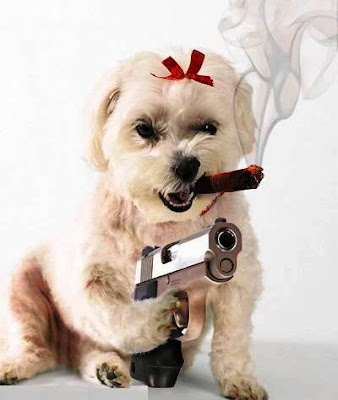 Finally, the day has come for the Watchdog to tell his story.....its what you've been waiting for in the soon released memoirs of the Watchdog:

"From the Dog House to the Blog House" by Willie Mehemet Nazzareno Antonio Watchdog, aka "The Hitman"

subtitled "A Former Devout Sicilian Catholic Mafia member Becomes Southern Baptist"
Watchdog readers have long thought that the Watchdog was just some boring, run-of-the-mill, trespassed church member gone bad...oh, but you haven't heard the REAL Watchdog story: his name might be just FBCJ Watchdog, but his born name is Willie Mehemet Nazzareno Antonio Watchdog, and he was born and raised as a strict Sicilian Catholic mafia gangster who became a baptist as a teenager.
And its all coming out in his new book, and will be retold (embellished) as he tours the world preaching about his old days as a teenage mafia gangster raised in a Catholic household and sharing his expertise on all things Catholic and mafia. And oh, can he spin a yarn!
Buy his book and you can meet the real Willie Mehemet Watchdog, aka "The Hitman". You will laugh, you will cry, you will open your wallet as you read about his life. Willie Mehemet Watchdog will at long last tell the compelling story of how he was raised a devout Sicilian Catholic by a strict Catholic father, and was disowned when he became a Baptist blogger at the age of somewhere between 13 and 17.
Here are some excerpts from the soon released classic telling the unique story of Watchdog:

"Mehemet Watchdog was born in Norway, but was raised in Europe, Beirut, and Turkey (along the Danube River), before emigrating to Columbus, Ohio, with his Sicilian Italian Catholic Mafia boss father at the age of 12 or 13 or 14 or thereabouts. He risked it all, tearing off his strict Catholic altar boy clothing to come to America and don his baptist tie and coat."

Hear how Willie Watchdog had to bear the brunt of jokes and ridicule and scorn for his Italian Sicilian Mafia upbringing:
"When I first went to church, I wasn't called 'Dago', or 'Mary worshipper', 'popeblower, 'Mackerel Snapper', or 'Al Pacino'....I got plenty of that OUTSIDE the church....they didn't care that I spoke Italian and was a killer. Oh yes, I said my Hail Mary's 5 times a day in the bathroom - that's how devout I was."
And his Sicilian Italian upbringing that led him to think that Americans wanted to kill him:
"Yes, in my upbringing in Europe, Beirut, Turkey, and other mostly Italian countries, I was taught that you Americans hated me for being a Catholic. Did I say I was trained to do that which was done in Godfather I, II, and III, and some of what was done in Goodfellas - especially the scene with the guy in the trunk?"

And about receiving his calling to become a baptist blogger:
"It was shortly after I became a baptist, though my English was still poor, though I could not speak as clearly as others, I surrendered to the ministry, I was being called by God to blog - it happened during a trip on a camel up the side of a mountain in Israel - and I knew God had called me. My brother and sister, if you are in this room, within the sound of my voice, I tell you that though I was in the Mafia, you are at war as well. Because though you are at war with God, God wants to win you, not kill you."
Wow!! What a conversion story Watchdog has to tell!
So put in your advance order for the story of the Watchdog...time is short!

Stay tuned for his upcoming books, after his star rises:

"The Rise and Fall of Mike Warnke, the Ex-Satanist: Lessons on How Not to Embellish One's Testimony"

"Out of the Sicilian Shadows: Leading Catholic Women into the Light of Christ"

Also, if you want to join Willie Mehemet Watchdog on a trip to the Holy Land, including a tour of his homeland in Turkey, Norway, Italy (Sicily), and a brief "cruise down the Danube" and other areas like that where Watchdog was raised, STAY TUNED! Coming in April 2011!!!
Posted by FBC Jax Watchdog at 12:01 AM

Two words for those of you who became a Christian in the 70's and 80's:

Watchdog: I needed to laugh. You provided that today. LOL I don't know if I should be laughing, but I have not done that enough during this. I confess, I am laughing. Hard. Thank you.

It would be funnier if there weren't so much truth in it.

And yes, even on your first post about this guy, Mike Warnke came to mind!

WD: This is a perfect parody for April Fools Day. Very funny. The fact is there are so many lies from the pulpit down through the congregations that all are tainted. The only TRUTH is JESUS. All men are liars. No wonder man is so corrupt. And no wonder this church age makes God sick.

I remember Mike Warneke for A Christian's Perspective on Halloween (1979) and book The Satan Seller (1973). Hadn't heard or thought much about him. Didn't know about the scandal surrounding him until now.

I saw Mike Warnke at the O'Connell Center in Gainesville in the mid 80's, as he had us all convinced that he was a former high priest in the church of Satan.

I remember his "performance" that night, because he fell of the stage during his talk. Yes, the man fell about 5 feet off the stage like a sack of potatos on the ground, laid there for 15 minutes, then finished his talk seated on a chair.

That event red-lined my BS-o-meter and I wasn't surprised to find out later that his story was a fake.

I wonder how many churches have had their own experiences with ministers with false credentials. FBCD had a Minister of Education who supposedly had a doctorate. He had just been passed from church to church and no one checked his credentials. First Baptist Dallas got him from First Baptist Wichita Falls. I don't know what caused someone to finally check up on him, but when they did he was gone fast. From what I remember, Dr. Criswell gave him a matter of hours to clear his office and be gone. Don't know what happened to him after our church.

Well done my friend. I didn't know that 'shy' you had it in you! So funny. But watch out, I think Caner's next gig will be stand up comedy. No, really. I think he would be great at that. Just make sure you're on a different touring curcuit. You wouldn't want him to have a Jihad flash back...

All of the stuff about him did not come out for years later. I had kind of moved on beyond him and that kind of thing by then. But it was still a shock.

Love your insight and ability to ask common questions that so many of we believers wish their leaders would come out from behind their secret closests and answer.

Today's post was a good one. Shows you are truly a man who has a sense of humor. I like DK said, needed a laugh. Too funny!

Fan of the WD (infamous) Blog!

A very funny and apt post for April Fool's Day and the times we live in!

This made me think of Pat Boones: No More Mr. Nice Guy

Oh, the things folks do to sell their stuff. Watch out, you may have Christian publishers contacting you.

I'm laughing so hard, it hurts.
And I'm a Catholic. (but no cosa nostra bambina)

So funny. Thank you.
If it weren't so close to the truth, it would be a lot MORE fun, I know.
Oh, dear.