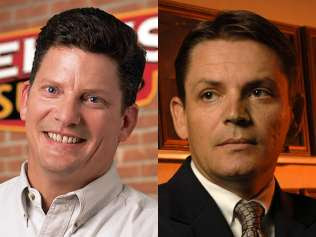 It is great that our newspaper here in Jacksonville is keeping a close eye on our city officials.

As we saw in Bell, California, there is no end to the shenanigans that will go on, if city officials think no one is watching.
Unfortunately for Councilman Richard Clark - a member of First Baptist Jacksonville - and Councilman Stephen Joost, Tia Mitchell of the Times Union was watching them Tuesday night.
And her story about them was on the front page of the paper this morning.
Tuesday night our Jacksonville City Council voted 13-4 to allow our NFL franchise, the Jacksonville Jaquars, to keep ALL of the $16 million from the new stadium naming-rights agreement recently signed with EverBank. You see, the Jaguars had agreed to give the city 25% of any revenue from such an agreement....but for a variety of reasons, our city leaders decided it was best to not hold them to that agreement, and let them keep our $4 million portion.

Here's the problem: right after Joost and Clark voted to fork over our portion of the $16 million to the Jags, both men showed the incredibly poor judgment of leaving their posts IN THE MIDDLE OF THE COUNCIL MEETING to wine and dine at Ruth's Chris steakhouse with the very same Jaquars executives who lobbied them in favor of the deal.
At least Joost got permission to leave early in compliance with city rules, but as Mitchell reported Clark did not. He just simply didn't show up after the 10-minute break following the vote on the naming-rights deal.
Both men missed two hours of council meeting, 10 votes, and a public comment period. They both are paid $45,000 annually for their part-time position that includes two monthly council meetings.
Good news is that the council president Jack Webb didn't seem too happy about it. "The council was in session," he said. "Social calendars do not trump council business. Period."
Amen, Jack Webb. Several other council persons critical of Joost and Clark were quoted in the paper.
Not surprisingly, Clark didn't admit he showed poor judgement. "I'm not going to constantly look over my shoulder and second-guess everything I do," he said.
Sorry, pal, but you're an elected official, and the Times Union IS looking over your shoulder, and I hope they do second guess every action you take...especially when you vote to give $4 million away and then immediately are found over at Ruth's Chris with the recipients. Kudos to Tia Mitchell and the Times Union for running the story.
Did I just say that? You better believe I did.
Posted by FBC Jax Watchdog at 1:40 PM

So now your into watching politics? Rut Row

They will say Prayers are being answered.

Nothing diverted here - didn't you see that one of Mac's sheep is a member of the church.

You bet we care about our politics here in Jacksonville!

So far three First Baptist members who are representatives of the Council thus far this calendar year have made themselves out to be total jerks.

Well, as you know, there isn't much of a dividing line in Jacksonville between politicians and baptists...and even sports...so yes, at times I'll dabble in commenting on politics and Jaguars.

That was fast. Good for them. Damage control. Admit you were wrong, apologize, don't attack the messenger.

Many will say this story was not newsworthy.

You bet it IS...because this sends a very clear signal to the other council members: the Florida Times Union is watching you, and they are not afraid to report your shenanigans. No monkey business allowed.

Kudos to Tia Mitchell and the Times Union.

Now, I hope Tia gets ALL the facts. Let's get the proof from the Jags execs who were there, whoever DID pay for the Jags' meal, that they did not pay for the two councilmen's meals also. Not a big deal, you say? Sure it is. They said they paid cash, and that is just not very likely. Let's make sure they didn't lie to cover their rear ends. So Tia, or better yet council president Webb, please demand proof from the Jags execs that they did NOT pay the meal for these two men. They claimed they paid for their own meals in cash, and let's just be sure to check out their story.

Great for the coverup, and untraceable transaction. Wonder what else was paid for in cash? The Votes? Hmmmmmm, I smell a skunk.

Is this councilman a deacon or in a leadership position at First Baptist Jax?

Dr Who...I don't think he is in leadership, but really don't know for sure.

But of all council members he should know better than to sneak out and cozy up with the Jags' lobbyists, as he owns a janitorial business that has a contract with the Jags.

I smell an ethics investigation coming....

Sounds like quid pro quo. Do these men really believe they're above the law?

Their actions in this is much more than poor judgement.

I believe all the 3 City Council members are either active or have been past "ushers" at First Baptist.

Godly "service" to run up & down the isles greeting & shaking hands. Politic's for votes is what I call it.

First Baptist knows how to get front page news but unfortunately for 2 years this church has been an embarrassment and a poor testimony to the City of Jacksonville.

Even today the news brings councilmen's "sob" apologies. As the song goes "It's A Little Too Late".

Anon - where do you think they've learned this from? Who is their example at the downtown church when it comes to these sorts of shenanigans? Who are the two power brokers down at that church? Hmmm?