Finally, the Ed Young Sermon Series We've All Been Dreaming of: "KOOL AID" 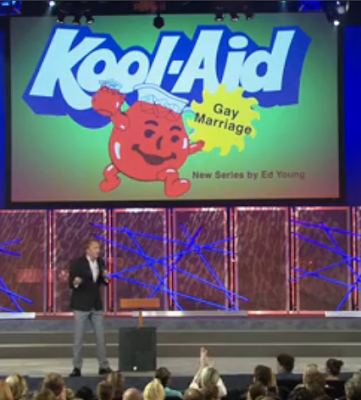 UPDATE: Since posting this article last night, I just can't help but wonder if this is not a media stunt. Really, how can General Foods, the owner of the Kool Aid brand, be in favor of Ed Young using their product logo with the words "gay marriage" on them, which would be associated with a sermon (presumably) against gay marriage?  Will be interesting to see how this plays out.
-------------------

Finally, the sermon series from Ed Young we've all been waiting for, starts Saturday June 2, 2012!!

Title of the next Ed Young, Jr. sermon series:

Yes, Ed has been accused of serving up the Kool Aid for his church members each week, and now he is going to actually preach about Kool Aid! The first topic in the Kool-Aid series is on Gay Marriage, so should be exciting to see how gay marriage and Kool Aid line up.

A few reasons why this is an excellent choice for a Fellowship sermon series:

1. The bible actually has nothing to say about Kool Aid or beverages with absolutely no nutritional value, leaving things wide open.

2. Kool Aid is 90% water and 10% sugar, thus there is a tithing lesson in there somewhere.

3.  "Kool" rhymes with "Fool", enabling Ed to call it something clever like "Fool Aid", much like he took "Gatorade" and called it "HaterAde" to accuse his criticizers of being "haters".

4.  So many of the Kool Aid marketing slogans can be adapted to the reality of Fellowship Church, such as the following (I'll let the readers figure out how to change the slogans for today's Ed Young-type church):

"Kool Aid to the rescue!"

5. Kool Aid is a perfect metaphor for the doctrine taught at many of these churches: it might taste good and look good, and the gullible drinkers think it is a healthy drink, but Kool Aid really offers no nutritional value except for the sugar content (and that isn't even supplied by the cheap Kool Aid packs).

6. We all know what "Drinking the Kool Aid" refers to - the tragedy of Guyanna and Jim Jones and the mass suicide, but since then it has taken on the meaning of people not thinking clearly about what they are taught, and blindly following the charismatic leader. Very appropriate metaphor for today's mega church and rock star preacher mind set.

So let's all go to Fellowship Church to hear about Kool Aid - but beware of the grape Kool Aid samples in the foyer.
Posted by FBC Jax Watchdog at 12:01 AM

Whatever thoughts or questions we may have had on this topic, I'm sure Ed is going to clear up for us...

And his Koolaiders will rise up and call him bold and courageous.

Once again, Ed demonstrates he has no regard for breaking the commandment of "Thou shalt not steal." He clearly thinks this doesn't apply to intellectual property, like Kool Aid marks and logos. It's stealing, Ed.

I am assuming that Ed obtained permission to use their logo...wouldn't he?

His creative people, if they are true professionals, would know to get written authorization to use the brand.

He probably obtained permission like he got permission to have dangerous wild animals on stage.

I'm going to assume that Ed is not going to be preaching a "pro gay marriage" sermon....so why on earth would General Foods - the owner of the Kool Aid brand, agree to allow a preacher to put their logo on a screen with the words "Gay Marriage" plastered on top of the logo?

It will be interesting to see how this plays out.

But the ultimate goal - as with Ed's crosstown neighbor Jeffress - will be to draw as much press coverage as possible.

FC doesn't obtain permission to use anyone's intellectual property. Just look at Ed's sermon series titled "Twilight". No way he got permission for that. They just hope they can fly under the radar. It doesn't even fall under fair use or parody since they didn't change anything in the artwork.

While we are waiting on Ed to clear all this up for us, How about a little contest? What Kool Aid flavor do you think best describes Ed?
You can find a list of flavors here. http://koolaidflavors.iba-ju.com/91-kool-aid-flavor/

Every time we think we've seen it all.....shaking my head. How can Ed call this circus a church? Come quickly Lord Jesus !!

I think Totally Fruity or Scary Blackberry describes him best, but I wish he was Invisible Cherry.

You mean people still actually go to that church? Amazing!

I am half expecting to see Ed endoring hair care products any time now.

Hey, WD! If you check out the FCFtWorth website, the logo and spelling of the name is different from what you see in the video you posted. The mascot isn't being used and Kool-Aid is being spelled with a C! I have a feeling that Kraft Foods (Kool-Aid is under the Kraft umbrella) has already been alerted to this and has served up a yummy glass of Cease and Desist flavor.

Troll - you said you saw the message and it basically was good. You gave yourself away, since Ed really hasn't actually preached the series yet. The still shot shown is just a promo given in the middle of his Memorial Day service.

Watchdog, while I heartily agree with most of your analysis of the mega churches, I just thought this was a little premature. Why not wait until he preaches the sermons to then analyze and offer valid criticism.

He has creative people, yes. And an entire organization to "help" other churches be as creative as they are.

Watch out, this Kool Aid stuff could turn , well you decide

I would have to assume he is using the Kool Aid metaphor in the way of getting people to drink it to think gay marriage is okay and to go along with it. It's a Jones Town reference, which is pretty tacky, but I do see how it would be applied there. Ed is a mess, but I really think it's unfair to write an article criticizing it before the sermon is even preached.

What about Cheese Balls?