Below are two pictures of Ergun Caner, courtesy of the Twitterer @caner_repent.

At right is the transformed Caner, who now goes by "Ergun Mehmet Giovanni Caner".

Before 9/11 I never saw the George Costanza look-alike on the mega church circuit. He was not famous. He was just a guy who grew up in Ohio from three years of age and became a preacher.

Just a few weeks after 9/11, my former pastor Jerry Vines brought the new version - not Costanza, but the new "former terrorist" version - into my church, and told us he was trained in Islamic Jihad, and he said:  "until I came to America, until I found Jesus Christ, I was trained to do that which was done on 11 September".

And the trained terrorist said it with an accent and rolled r's. And he told us he couldn't speak good English in high school.

We were tricked. Bamboozled. We were preyed on, out of our fear from the events of 9/11, we wanted proof that our faith was real, that our faith COULD protect us, that it could change even one of those evil terrorists. And our pastor obliged, and presented what we so much wanted.

But it wasn't real at all. It was fake and contrived, right there on the platform of our church.

The more time passes, the more sickening and surreal it all seems. 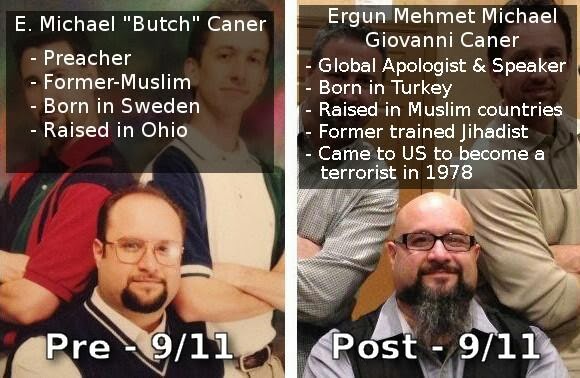 Caner is a FAKER. (not fakir!). He has been demonstrated to have lied in public, before crowds, in a wide variety of circumstances. It is his act, not the truth. He is putting on a one-man show, which could be entertaining if it were not so abusive of his audiences.

Ha Ha Ha. That's George Costanza from Seinfeld. That Caner tries to appear as a menacing jihadist. He is a wimpy Constanza. Bald, insecure, loser.

Man, everyone knows this stuff. Just check out James White. He has tons of information regarding Caner. How did he get it? He actually interacts with Muslims in real public debates and was made aware by them. What a great testimony Caner....

Looks like since 9/11 he's gotten fatter and grown his beard out to match his Islamic Jihadi backstory.

Has anyone considered he might be a present-day "Psalmanazar the Formosan Cannibal", i.e. an impostor and fabricator for fame?