Steven Furtick Has a "Walter White" Problem: What Do I Do With this Boatload of Cash? 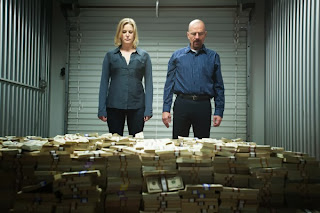 Readers, if you want to read the most important article written so far analyzing the Steven Furtick mansion issue, please read the analysis of Dr. James Duncan at his Pajama Pages blog.

Duncan explains what Steven's root problem is regarding his money: he has a "Walter White" problem. Walter White is the main character of the hit TV series "Breaking Bad" who had gained so much money from his side business, but yet he really couldn't spend it for fear of the source and magnitude of his fortune would become known. Get the picture? Read this article, it is masterful.

You might say who is James Duncan? Well, James is a blogger who dared to write some articles that were mildly critical of Perry Noble and NewSpring church about 4 or 5 years ago. His family then suffered much at the hands of Noble's minions who sought to harass and harm Duncan, including the disruption of an adoption an attempts to get Duncan fired from his position at Anderson University - and it led to a lawsuit settled earlier this year.

Duncan probably more than any other person has experienced the ugliness of the cult-like mentality that exists in churches like Furtick's and Noble's, where followers view critics as the enemy. They view themselves as God's agents to protect "God's man", and Noble's preaching during this period against bloggers fueled his followers actions against Dr. Duncan. Like me, he has gone through the grueling process of suing a mega church, and the legal discovery process that ensues. Like me, Duncan has sat down face to face with these men and their minions, and watched them answer questions posed by their lawyer. What you see on the platform ain't what you see of these people in real life - both Duncan and myself can attest to that.

And Duncan did prevail, choosing to settle out of court for an undisclosed amount of money for the very real damage done to he and his family.

Duncan is an excellent writer - he is a professor of Communications at Anderson University, and he knows what he is talking about in these matters. And he has more to add to the Furtick saga, so stay tuned to his blog.

Read his Furtick analysis - and his conclusions at the end are some that I really hadn't considered before: the likely outcome of all this money being dumped in the laps of these seeker-friendly celebrity pastors.
Posted by FBC Jax Watchdog at 7:20 PM

Sorry, blogger was acting up and I had to repost this article and the comments are deleted. My apologies.

The articles Speke for themselves. Anybody with an ounce of discernment should be able to see what these guys are up to.

Everybody please pray that God will expose these men. If we ask Him to, He will do it.