Donald Miller on Pat Robertson's "Pact With the Devil" Comment 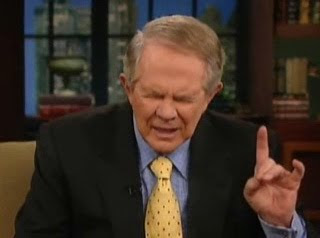 Before today, I had not read anything written by Donald Miller, but today a WD reader sent me a link to his latest blog post responding to Pat Robertson's ridiculous statement blaming the Haiti earthquake on the Hatians themselves.

According to Robertson, the Hatians made a "pact with the devil" to get out from French rule. Robertson said "no one wants to talk about it" - as though he is the brave one appointed to remind everyone that the Haitians brought this on themselves. No one is talking about it, Pat, because it's NONSENSE. Yes, a pact with the devil says Robertson, and apparently Robertson was there when the deal went down because Robertson quoted the devil as saying, "Ok, its a deal."

Miller's article is worth reading for every conservative Christian outraged at Robertson's comments, especially those who follow this blog. He analyzes Robertson's statement in the larger context of controlling personalities in religion who seem willing to paint God as some vengeful tyrant, yelling in the pulpit at people who don't agree with them, surrounding themselves with yes men, and who seem fearful of allowing people to have a free will. Miller's post is a definite must read for WD readers.

"A Response to Pat Robertson's Comments About Haiti" - by Donald Miller

Also, if you didn't hear Robertson's comments, below is a link. His comments deserve to be thrown in the dumpster, but we'll put them here for all to see; especially since Robertson's website edited their clips to exclude the portion containing his diarrhea-of-the-mouth comments.

Article on the subject:
http://www.blackandchristian.com/articles/academy/gelin-10-05.shtml

First, it is irrelevant whether I agree with Pat Robertson or not. Let me throw that out there because my comment is not about my support or disapproval of Pat Robertson's assessment of the catastrophe in Haiti.

"The higher the monkey climbs the tree----the more you see his tail!"

Pat is the master at tree cimbing, in my opinion and he seems to get better each year for those stupid enough to buy his 10-10-100 manure!

Robertson is another of these dangerous individual TV preachers who hears directly from God while at the same time selling Jesus!

Pat supposedly had God directly contact him and tell him to run for president inwhich he lost miserably.

This guys is always making so-called prophecies(and other off the wall statments)from God that are never fulfilled; Which in the O.T.would have gotten him killed with the first unfulfilled flub!

Also Pat is no great theologian or he would not be making these thoughless statments!!!

"Haiti was forced to pay France for its freedom. When they couldn't afford the ransom, France (and other countries, including the United States) helpfully offered high-interest loans. By 1900, 80% of Haiti's annual budget went to paying off its "reparation" debt. They didn't make the last payment until 1947.
Just 10 years later, dictator Francois Duvalier took over the country and promptly bankrupt More..ed it, taking out more high-interest loans to pay for his corrupt lifestyle. The Duvalier family, with the blind-eye financial assistance of Western countries, killed 10s of thousands of Haitians, until the Haitian people overthrew them in 1986. Today, Haiti is still paying off the debt of an oppressive dictator no one would help them get rid of for 30 years.

The rest of the world refuses to forgive this debt.

So, in a way, maybe Robertson is right. Haiti is caught in a deal with the devil, and the devil is us"viltfu

Anonymous 6:58, THANK YOU! THANK YOU!! There are a number of reasons why Haiti has not prospered. Some of which have to do with US policy. The US occupied Haiti until 1937. Thank you for bringing these facts to light. Whether some know it or not the view Robertson espoused is widely held by many white evangelicals who are there as missionaries. Black missionaries have promulgated the same in ignorance of the country;s history and the US's loans to Haiti.