The Charges Against the Watchdog - Part 2 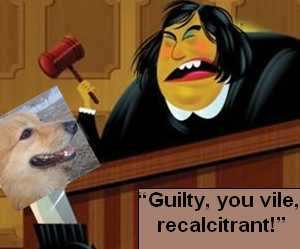 In the previous post we looked at the first four accusations made against the Watchdog by the "Discipline Committee" in their letter dated 11/28/08 sent to the man and wife they are wrongly accusing of being the owners and controllers of this blogsite. The letter contains specific accusations lettered "A" through "P". We will look here at the next 5 accusations.

"E. You have charged First Baptist Church of the manipulation of financial and ministerial responsibilities for personal gain."

Not sure how they would define "manipulation of financial and ministerial responsibilities"...sounds like some lawyer speak there. While this committee is very vague in their accusations made against the Watchdog , the Watchdog has been very specific in accusations against Mac Brunson to which they may be referring: Mac Brunson accepted a $300,000 land gift from one of the church donors just weeks after he arrived, he has displayed nepotistic tendencies in placing wife and son on staff in newly created positions of which the church has not been told what their ministerial responsibilities are...Mac has used the FBC Jax website to advertise for his "Holy Land" trips...he has used one of our most highly attended Sundays (Easter Sunday) to hold a special offering to raise funds to put his sermons back on nationwide TV (which by most reasonable standards is a budgeting issue and a recurring cost not subject to "special offerings). That's just a few. If pointing out those abuses of power is what they mean by "charged the First Baptist Church of the manipulation of financial and ministerial responsibilities for financial gain"...then the Watchdog is guilty as charged for pointing out those abuses.

"F. You have argued that First Baptist Church members should disregard and defy the decisions and policies of the clerical and lay leadership of the church"

Which "policies" and which "decisions" are they referring to? Very vague. Perhaps they are referring to "decisions" such as starting a school, or decisions such as starting a satellite ministry, or decisions to change the bylaws while keeping the congregation in the dark about what those changes were. In a church of tens of thousands of people, not everyone will agree with all of the "decisions" of the pastor, and some people will choose not to support those decisions with their money or their time and talent. The Watchdog has given his views of those big decisions made by the pastor, as well as smaller decisions: such as decisions to raise money for his TV ministry, decisions to utilize "church marketing firms", decisions to advertise Holy Land trips, his decision to call us names and belittle us from the pulpit, and a whole host of other decisions made by the pastor. As to which "policies" the Watchdog is accused of telling members they should disregard and defy is uncertain.

"G. You have held First Baptist Church's leaders in contempt before its own congregation and the world without restraint"

To hold someone in "contempt" would mean to belittle them, or to scorn them or to disrespect them. If pointing out abuses of a pastor and voicing an opinion on them is holding them in contempt, then perhaps the Watchdog is guilty. I would point out that the pastor himself is guilty of the very thing of which the Watchdog is accused, using this same standard, of holding the entire congregation in contempt as he belittles them on a regular basis with his condescending, looking-down-the-nose attitude, and he has done it without restraint as he continues this behavior. He has also shown contempt for Sheri Klouda in lying about her and not apologizing, and contempt for the memories of the late Mrs. Criswell and Mrs. Truett, as he has said disparaging remarks about them while functioning in his role as "pastor" of our church.

"H. You have questioned, without a factual basis, the legitimacy of the ministerial and operational policies of First Baptist Church."

Sounds like a repeat of letter F. Again, very vague.

"I. You have discouraged the success of the 23rd annual Pastors Conference and have repeatedly cast doubt on the integrity of its operations and objectives"

The Watchdog has expressed several concerns about the Pastors Conference - the latest of which is the charging of unusually large fees for the use of our facilities by other ministries - such as $750 for a display table, and up to $12,500 to display videos, banners, and to mention the ministry from the pulpit. The Watchdog has been VERY critical of transforming our Pastors Conference into a marketing bonanza where funds have been raised through the selling of promotional time. Our church facilities were built using the monies given by the people of God for the furtherence of the gospel - NOT so they could be used by Team Brunson and their marketing and promotions firms to raise revenues by charging access to non-profit ministries for the privilege of using the building. The Watchdog has also been critical of the decision to charge members entrance to portions of the conference. The Watchdog has also been critical of the pastor using the conference to give sole credit to his own son for its success, even going so far as to crediting his son for "raising $100,000, which is more than twice his salary" in front of the pastors and Dr. David Jeremiah who was on the platform. So yes, there has been much the Watchdog has said about the Pastors Conference. If shining light on these terrible decisions and commenting on WHY they are terrible decisions - if this harms the Pastors Conference - blame Team Brunson, not the Watchdog.

Here's a thought about "operational policies" of FBC Jax. Can someone please explain the role that Mrs. Brunson plays in our church? If she is on paid staff, and in the pastor's suite...and if she attends staff meetings...what is her position and role in defining the direction of our church? Is it defined in the bylaws? Is she a "co pastor"? What is her title, and what is her job description? Is her salary commensurate with her education, qualifications, and experience? No accusations. Just questions.

Tomorrow: Items J. through M.
Posted by FBC Jax Watchdog at 8:05 AM

This is off-subject, but I am curious.

We see that some of Mac's sermons are on this FBCJ website, for sale. Where do the profits go?

The points A through P are clearly drafted by lawyers [who might clearly constitute the majority of the Discipline Committee]. Notice the mention of fbcjax members through the points. This is to draw up a legal case to excommunicate WD, so once all this is laid before the Church, the Church can feel WD is attacking them. This also has the side benefit of WD defending himself as not attacking the Church or fbcjax members.

I do not know what the procedures are for excommunication at fbcjax. Do they bring this up before the entire church to be voted on? My guess is, probably not.

Now based on the past two posts, WD clearly states that he was not the one who was served the papers.

This poses some troubling questions.

At this point, will the fbcjax leadership apologize to the wrongly accused? How about other members who were also approached and questioned if they were WD, and who ALL have since left the Church.

What techniques were used in identifying WD? Were any extra-legal means used in obtaining warrants to access bellsouth/att internet records? Or did they hire private detectives to go after web espionage? Or was behavioral psychologists used in narrowing WD's profile and whereabouts in the Church based on his public disclosure here?

There are too many questions here, but no answers. At this point, the only way fbcjax leaders can level charges against WD, is to go public with their charges and how they positively identified WD. This would reveal, if fbcjax leadership broke any laws of this land in doing so. [Remember the case of HP and cell phone records?]

Now even if they have identified WD as WD, and they succeeded in excommunicating him, does this stop this blog? Clearly WD can still watch fbcjax broadcasts [he could further mask his whereabouts by using anonymizers and proxies] and still continue to blog.

As long as WD is not breaking any laws of this land, he will continue to blog. Of course he might decide to quit before hand but that is his choice.

My naive perspective is, it would have been lot simpler if Pastor Mac just went public with his actions and addressed these issues head-on than through proxies.

I sincerely pray for peace and discernment amongst ALL fbcjax members and WD's Readers.

watchdog, could you tell me mac brunsons emaill address? I have a few concerns of my own as well.

1. The office of pastor is a legitimate one biblically speaking; not every man holding the office is worth of respect as a pastor. The big job calls for an even bigger man--and senior pastors must make certain each day that they are.

2. This blogsite seems to result from the fact that adherents to each side of the issues is passive-agressive, or at least seems to feel as if he must function that way for whatever the reason. When it must be that way, there's little hope for a turn around. Maybe 2009 will be different somehow. We can only pray.