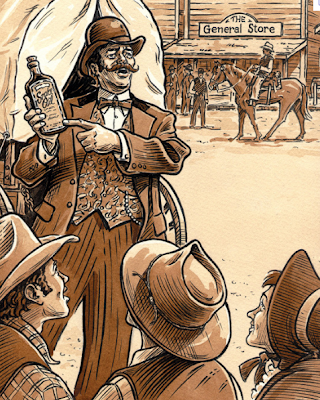 Ergun Caner finally is saying goodbye to the Southern Baptist Convention. He was saved, educated, employed by, and most importantly for him: he was enriched with money made off of Southern Baptists who were duped by his stories told to our churches over a nine-year period since 9/11.

Ergun reports on his website that he is moving on to be the Provost at Arlington Baptist College, a seminary funded by the "World Baptist Fellowship", a group of fundamentalist baptist churches having no connection to the SBC. Perhaps Ergun was confused, and when he heard that the WBF wanted to hire him, he thought it was the WWF.

Good for us SBC'ers. Good for Ergun. No more of our church or state dollars are going to support Ergun at Liberty University. And no more of our SBC students will be taught in Ergun Caner classrooms.

Ergun is smart. Like any good traveling medicine man selling his magical elixirs and tonics, he knows when it is time to fold the show, load up the stagecoach, and head to the next town to a fresh market who needs a cure for what ails 'em. So Ergun is now moving on to Arlington, Texas and the WBF..and presumably a brand new market of churches and students who come from those churches who haven't heard the yarns and tales of being raised in Europe, terrorist training, and the jokes about mutant grandaughters and ugly women and satellite dish hats.

In honor of Ergun finally leaving the SBC almost exactly 10 years after he shot to stardom in 2001 within the SBC, I present the "Ballad of Ergun Caner", to be sung to the tune of the Beverly Hillbillies:

Come listen to a story about a man named Mike,
A poor preacher man, couldn't find a church he liked,
Then one day, early 11 September morn,
Ergun Mehmet Gioviani Janel Caner was born.
[Muslim that is, shaved head, goatee.]

Well the first thing you know ol' Ergun's a rock star
Jerry Vines said, "Ergun You're Gonna Go Far!"
They said, "Liberty Mountain is the place you oughta be"
So, he loaded up the truck and moved to Virginny.
[Falwell, that is, book deals, preaching gigs.]

Well, the next thing ya know, ole Ergun is found out,
Even Peter Lump and Norm can't erase all the doubt,
Falwell's son says "your time here at Liberty is done",
So he loaded up the truck and moved to Arlington.
[Texas that is, fundamentalist baptist, KJV.]

Well now its time to say goodbye to Caner 'cept Emir his kin.
He would like to thank you SBC dupes fer kindly droppin' in.
You're all invited back to hear his next WBF preaching gig,
To have some cherry Kool Aid and take a heapin' swig.
[Muslim, that is. Trained terrorist. Ex-SBC'er]

Y'all come back now, ya hear?
[banjo solo]

Sad that you would make fun of God's man.

This Brother has done more for the cause of Christ since Billy Graham.

God bless you Dr. Caner, you taught me to be loyal and to be evangelistic and to do whatever it takes to see people get saved.

And so close to the truth

When is somebody gonna call out Peter Lump for the cruel things he said about those who questioned the story? Lump himself should join Ergun and teach wine is in reality grape juice.

Both could be comfortable among people who swallow their deceptions.

No matter where this man goes his reputation here in the South will follow him - more bad, than good! No surprise to any he would pull out - I for one is glad he is moving one!

Do whatever it takes to see people get saved - Righ, even speaking made up stories & lying in the pulpit which was proved to be true!

WD in brilliant form as usual.

"Sad that you would make fun of God's man"


WHATEVER!!!!! So liars are God's men?!! I love it. ONLY in the cult of the SBC. People like you are why the SBC is not even taken seriously. People know the SBC is one big cult.

Just for clarification, there are quite a number of people in the SBC who would not agree Anon @ 10:44. In fact, I know several SBC Churches who disinvited Ergun after the debacle started. And I even know a whole state covention where he is persona non grata at their events (whereas in the past he was a regular speaker).

There is no doubt that many of the BI guys like Lumpy came to Ergun's rescue, but from my vantage point most SBC folks I know were upset about it, whether or not they displayed their angst publically.

Gotta wonder, how much grace would you extend to a Physician who was as reckless in his practice as Caner has been with the truth? Would you actually use a Doctor who has a reputation for malpractice?

This is VERY creative and humorous. Lighten up out there in the blogosphere.

Are you a Christian?

Just wondering if he will stop by and pick up his brother Emir in Cleveland Ga as he passes through Georgia.

It is evident the Baptist in Ga can not read, otherwise he too would be packing up - even if those within the Georgia Baptist Mafia are protecting him like he is a KING.

Surely they would make a better Tag Team with those WWF Rasslin' Texans in mean WBF Texans :)

Anon. May 18, 10:44. Surely you are kidding? What evidence do you have that Ergun Caner is "God's man?" There is ample evidence that he not. At best, he is a seriously flawed individual, driven by insecurity, masking as inflated ego. Worse, he is a lying pretender who traded on the deaths of the victims of 9/11. Worse still, he remains arrogant and unrepentant. He and all he represents are disgusting.