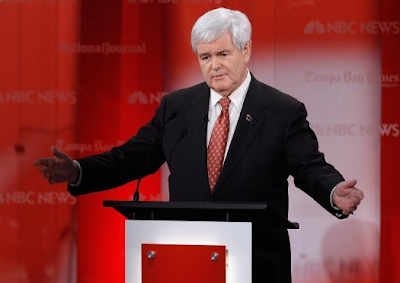 On Newt Gingrich's website tonight, his schedule shows a stop at the First Baptist Church of Jacksonville, Sunday January 29th from 5:00 pm to 6:00 pm.

This weekend is the First Baptist Jacksonville Pastor's Conference, so Newt has an opportunity to see all the Southern Baptist pastors who have gathered there this weekend.

A few very important recommendations for Newt and his campaign staff when he visits First Baptist Jacksonville tomorrow:

- don't mention that you've converted to Catholicism and that you're seeking annulments of your prior marriages. The peeps at FBC Jax have been taught that the Catholic church is a "cult", as one of their preachers has said on multiple occasions. Don't make any references to your priest, as priests are "cult leaders" according to former FBC Jax preacher Jim Smyrl, and you wouldn't want to be associated with cult leaders.

- if you speak to the assembled at FBC Jax, don't let your wife say anything. Women speaking anything of substance on the platform at FBC Jax is frowned upon, especially to all of the "men of God" that will be assembled there.

- characterize the criticism from Romney as "being under attack from Satan" for doing the will of God, and that the attacks by the media are how you know you're doing God's will. The pastors can really relate to that line of thinking about criticism!

- refer to the preachers as "the men of God". They really dig that. And try to mention that you "tithe", that will earn you some points with the faithful for sure.

- when you refer to Obama, say you're going to "shut him down" in November!!

- tell everyone you don't know who your running mate is going to be, but that it rhymes with "buckabee", and you'll get a standing ovation.

- if you want to hit a home run and nail down Duval County on Tuesday, tell the good people of FBC Jax that our economic recession is due to God's judgment for all of the non-tithing Christians. They will GO NUTS!!

- if you get cold feet about FBC Jax, do NOT switch the venue to Trinity Baptist at the last minute! Google "Bob Gray and Tom Messer" and you'll see what I mean.

Most importantly, above all else, if Mac Brunson calls you to the front, and asks you and your wife to kneel at the altar so he can pray for you, run for the exits. That didn't work out so well the last time Mac tried to lay hands on a politician the Sunday before an election. Ask Mike Hogan, pictured below.

And just kidding, Newt. The Watchdog will vote for you over Obama any day. :) 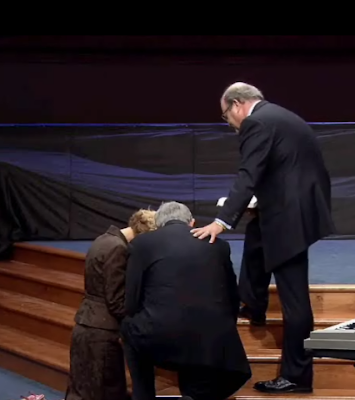 Since Rick Santorum will probably not get the votes, Newt is a better choice than Romney or Ron Paul

PLEASE TELL ME THATS NOT TRUE. IT RUINS IT FOR ME. CINDY T. YEAH, I'LL PUT MY NAME.

This is outrageous. WHAT IS FBC THINKING? Newt is a globalist and a practicing Roman Catholic. Sorry Dog, but if you do your proper research, there is a lot of truth in what Smyrl said. Please don't shoot this messenger, but do your research. Chick Publications (who puts out the famous cartoon tracts) has tons of info on Catholicism.

This is outrageous. WHAT IS FBC THINKING? Newt is a globalist and a practicing Roman Catholic.

Globalist and christianity is a good marriage, be proud of the comming false recipe. Great opportunity for Jesus to Rule.

what does it make you feel like, dog, to know that newt gingrich is welcome there and you aren't? seriously, this is really getting to me. will he be on the platform do you think?

Jeff Brumley just tweeted that FBC Jax told him that Newt asked to attend, but will not be speaking.

Will be interesting to see what kind of reception Newt gets from the men of God in attendance.

just to let you know,whether you care or not - and from what i read here, you probably do not. i had heard about your blog, read it and actually watched FBCJ on tv and then went down there. what i saw on tv did not match what you were saying. when i was down there, neither did that. i'm not sure what you are all about, but, thanks to you, and i'm sure you do not like it, i love it there ! i love the people there and of course the pastor. so, just letting you know. if you think what you are doing is getting people out of there or keeping from there, you are wrong. so keep it up and i'm sure many more like me will find a great place.

"Newt has framed his sexual history — the parts he isn’t totally denying — in terms of a redemption story. (“I’ve had to go to God for forgiveness.”)

Everybody likes a story of the fallen man who rejects his wicked ways and starts a new life. Remember how well George W. Bush did with the one about renouncing alcohol on his 40th birthday?

There is, however, a lot of difference between giving up drinking on the eve of middle age and giving up adultery at about the time you’re qualifying for Social Security. Cynics might suggest that Newt didn’t so much reform as poop out. "

At least Newt is not philandering deacon, SS Teacher, Pastor or Minister of Music at FBC Jax. (not naming names) or a deacon that likes teenage boys. (snicker)......

Give me a drunken, repentant Cat-a-holic any day over a self righteous, better than thou Baptist.

"so keep it up and i'm sure many more like me will find a great place."

When riling at you didn't work ,
they now they try "sugar"

hey, I watched it on the computer and its 6:35 and so far they haven't shown Newt Gingrich...don't know what happened before the cameras started rolling, however.

I think it's great that Newt is attending FBC Jax. I hope folks welcome him and talk to him.

Evangelicals are beginning to draw the circle too small on who their candidate "should be."

Everytime I see Robert Jeffress on a cable news show saying "how a Christian should vote" I want to gag.

Voting is an individual right and a proprietary choice. And the individual should do his own due diligence and not rely on any church or pastor to tell him "how to vote."

Newt had to sit through Joel Rosenberg's sermon, a bunch of music before he got his introduction. But John Blount did make it worth his while, and laid it on pretty thick.

Will you be putting the clip up for those of us that missed it?

I wonder if Newt kissed the cuff links?