Top Story of 2011: Ramping up the "First Fruits" Tithing Doctrine Amongst the Emergents and the SBC 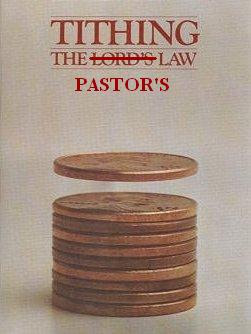 I wrap up 2011 (a few days late!) with what I consider the top story on this blog over the past year, which has to be the adoption by more and more pastors of the "first fruits" tithing doctrine. It is a teaching that has gone from the emergent churches and now has made inroads to the Southern Baptist Convention.
Robert Morris, pastor of Gateway Church, was introduced on this blog in June as he is really the grand-daddy teacher of the "first fruit" tithing nonsense. In the first post on Morris he told his congregation that forking over 10% of their income was a requirement to avoid losing one's job, their kids, and to avoid divorce.

Morris preached his first-fruits nonsense at Perry Noble's church, at the Celebration Church here in Jacksonville pastored by Stovall Weems, and also at Rick Warren's church. Warren even went so far as to present Morris as a top financial expert.

2011 also saw Paige Patterson arrogantly tell his seminary students during chapel that the reason he is so blessed and why they are so poor is because he has been so faithful to tithe and many of them have not. In fact Patterson attributes his having a pulpit to preach in every week from him tithing 20% - which is great, but he is still about 3% short of the Old Testament 23% requirement.

No year would be complete without Steve Gaines rolling out his accusations that his church members are living in stolen houses and driving stolen cars, and Gaines didn't disappoint. He even rolled it out at Johnny Hunt's church in August.

Ed Young stayed true to form in 2011 by pushing the tithe, offering a money back guarantee if people would sign a pledge to tithe and then found that God didn't keep his word by blessing them.

A few bizarre tithing tactics: Perry Noble claimed that there would be less homosexuality if Christians would tithe, and a little-known pastor here in Jacksonville aggressively accused his members of being "heel grabbers" and "supplanters" for not tithing.

I will continue to highlight these false teachings on tithing as I become aware of them in 2012!
Posted by FBC Jax Watchdog at 11:00 PM

If ever a preacher believed in First Fruits tithing, it was Homer Lindsay Jr.

James Brown - you are wrong, Homer Lindsay did not push the nonsense of Robert Morris.

Happy New Year WD. I've enjoyed both reading and commenting on your blog. Continue to labor in the work of enlightening believers to seek out the truth of God for themselves. Please continue to highlight the "TITHE" and "FIRST FRUITS" teachings that are unbiblically taught by so many! The biblical truth you present, when compared to the various church doctrines that are being pushed; has exposed much error to those who truly want to know the truth. As Jesus said to those Jews who believed on him in John 8:31-32 "If you continue in my word, you shall know the truth, and the truth shall make you free..."
Elder-gab

They are desperate. The money is not flowing as freely as it used to.

In their world, it would be a sin to help out a poor person directly. You must give it to the church building first so they can siphon off their cut.

They are selling modern day equivalent to indulgances. Lots of people "tithe" and bad things still happen to them.

Seemed to me he did.

Irritating that tithing has made its way to the forefront of the SBC through such angry, arrogant voices as these named - when personal faith is about so much more.

Much sadder for the cause of Christ that their pews are still occupied Sunday after Sunday.

I would like to know how these preachers can seriously believe that tithing is still enforce on Christians. Are they that ignorant of the old and new covenants or do they just ignore it because of 1) tradition, 2) others are doing it or 3) fear that if they don't create this legalistic need for 10% tithing that they won't have a nice church building, staff and fat salary? Maybe all three?

There is no "principle" or "example" of tithing to suggest that it is required of Christians. That nicety is only made up by preachers who want the 10%. They proclaim you are cursed if you don't tithe. The Bible says that you are under a curse if you do.
"For all who rely on the works of the law are under a curse, as it is written: “Cursed is everyone who does not continue to do everything written in the Book of the Law."

Usually those that have such an issue with teaching on tithing is because they don't do it. Seems to be true in your case.

There are plenty of educated, Godly, wise, and Biblical pastors who believe and teach it in the right way.

Did you ever consider that you are the one in error or are you so possessed with mega-church pastors that you can't see the truth?

Happy New Year WD! Keep speaking the truth. This blog was a blessing for us in 2011 and it set my family free from the "First Fruits" nonsense.

Happy 2012 - we too enjoy both reading & commenting on your blog ministry - you have a lot of followers who need someone like you writing articles and speaking the truth - it's a popular blog & word of mouth continues to be spread around the universe.

Warm Regards to you & Your Family!

One of my new year's resolutions was to read the Bible through this year.

I'm up to John the Baptist in Matthew today.

If you think that WD is tough on Mega-Preachers who teach false doctrine, you should read what John the Baptist had to say to the religious leaders of his day.

WD is a fluffy little bunny by comparison.

I've found that it's much easier on the pastor to just preach the Bible and let the Holy Spirit deal with people about how much they should give.

I'm thankful that our church is full of generous people who understand that all offerings in the New Testament age are free will.

I'm thankful that our church is full of generous people who understand that all offerings in the New Testament age are free will.

We became regular tithers, giving more out of love because we were not hounded like the mega pastors do - we left FBCJ because it has become a Bank of First Baptist whose leaders have blantantly
overpaid a Sr. Pastor who only works part time.

The interesting thing is altho we've been gone from FBCJ about as long as the W/D, the accounting department still hasn't taken us off their records and yet we received a letter on Christmas Eve about the need to give (while Mac is planning his cruise trip). Shame on the deacons for the decline of a church the community was honored for - now it's a joke!

I surely do wish we had a John Wylie or one like him here in Jacksonville.

Thanks Pastor, for your wise comments.

Get ready to post. I'm sure this fodder will be spoken at furtick's code orange revival.

I actually agree with Tom that if you are determined to stay under a mega-church pastor then quit giving and the money will dry up and they will move on. My suggestion is save your tithe and then give it on the first Sunday when they are gone. I'm sure Mac can find plenty of other places that want to be abused.

Just want to echo several of the other anons by saying thank you for your blog ministry. I have been so blessed, and grown so much as a Christian, from reading here. Your blog has been used more than any of us probably realize, and I for one hope you continue. Blessings to you and your family for a wonderful year.

Happy New Year to you D, and to all of you that read the blog!

2012 should be a very interesting year, and I look forward to continuing the blog into its 6th year!

Had a great 2-week vacation over the holidays, celebrated 25 years of marriage with my wonderful wife on a cruise - not to the Holy Land or Med - and took some time to visit NYC with the entire family.

Ready to resume my normal schedule!

I will be seeking your help in the comming days. I have been focusing on soul winning and would like your support.

I will be praying for you and all of those who will be enterested in watching the Holy Spirit perform some soul winning miracles.

congratulations on your anniversary as well! Wishing you another 25, at least!

How did the Watchdog miss this gem?