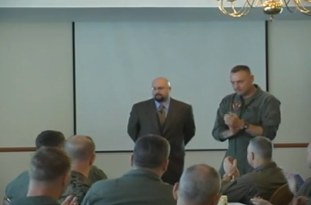 As reported yesterday on Jason Smathers' blog "Witness Unto Me", Ergun Caner and his lawyer David C. Gibbs III have attempted to take down videos posted by Smathers documenting Caner's deceitful training sessions of U.S. Marines in 2005. Smathers is fighting back, legally contesting the takedown, and filing a grievance with the Texas bar against Caner's attorney, claiming the takedown request is an abuse of copyright law, given the very videos they are attempting to take down are property of the U.S. Government.

Please visit Jason's blog here to read about this take-down request, and to view the actual letter sent by David C. Gibbs III to Jason's video hosting company Viddler. Jason Smathers is one of the blogging heroes in this Caner story - he did an incredible amount of research to document for all of modern evangelicalism the depths of the Caner controversy, and Christians everywhere should be grateful to Jason for his work.

Here is some background and analysis and additional information regarding Caner's recent attempts to scrub the Internet of videos documenting his decade of deceit:

Above is a picture of Ergun Caner conducting one of the two training sessions of our Marine officers in New River, North Carolina, on April 15, 2005. This still shot is from the videos of this event that blogger Jason Smathers obtained from the United States government back in 2010 using a Freedom of Information Act (FOIA) request.

Hands down, the videos of the two Ergun Caner presentations made to our Marines on 4/15/05 are the most egregious deceptions that Caner committed. As I said back in 2010:


"It is one thing to listen to Caner spin his yarns of his days growing up in Turkey when he is front of the guffaw'ing Ohio Free Will Baptist men who are absolutely eating out of his hand. What's the harm: they hear some good stories, hear some great ethnic jokes, get some laughs, and return home to their churches in Ohio.

But to watch a Colonel stand in front of his soldiers and tell them they are about to hear from a Turkish-born Muslim, who came to the states at age 14 through New York, describing him as someone who has seen the "Islamic culture from both sides" just makes my blood boil. These are people who weren't there for a laugh, they weren't gullible Christians on a retreat hoping to be entertained; they were there to try to learn from an expert the culture of the country where they all will have a big target on their chest."

Well, this story just won't die. As I said in my opening paragraph, as Smathers wrote about yesterday on his blog, Ergun Caner has hired the Gibbs Law Firm to help him take down Internet videos - including the two Marine training videos obtained under FOIA by Smathers - that document Caner's "decade of deceit".Caner is also attempting to take-down the videos by blogger "Moses Model", as he wrote here.

As I documented back in the summer of 2010, Caner's decade of deceit started in 2001 right after 9/11, when he was invited by Jerry Vines to speak at FBC Jacksonville. Right in front of my eyes, at my church, with my pastor nodding approvingly, it was then that Caner transformed himself from the little-known "E. Butch Caner" into "Ergun Mehmet Giovanni Caner". His claims to be raised in Turkey, of his training in Islamic Jihad to "do that which was done on 11 September" were all made up. He took advantage of the most horrific terrorist attack on our soil to launch himself to stardom in front of scared, gullible Christians after 9/11. He also gave a similar talk to Prestonwood Baptist Church in late 2001 as I documented here, which was rebroadcast as recently as 2010!

But Smathers is fighting back, thank God. He won't let Caner bully him into letting those videos be taken down permanently.

I predict this is only the beginning of Ergun Caner's offensive, and that it will backfire on him.

I will do my best to stay on top of this story.

Meanwhile, thank you Jason Smathers for fighting the good fight, standing up to Ergun Caner and defending your right to post those videos.
Posted by FBC Jax Watchdog at 9:52 AM

This sort of effort only brings new life to an almost forgotten event. If EC wants to take action, he will find his name spread all over the net with his comments attached to it.

Once again people will have the issue of what constitutes truth and if a good story can be dramatically improved without becoming a lie.

I just saw Caner interviewed on a weekly Christian show, comes on TBN on Sundays, called 'The King is Coming,' hosted by Ed Hindson. He was interviewing Caner about Islam.

I sent Hindson an e-mail via his site with links about Caner, detailing Caner's dishonesty.

Colonel? You DO realize that Ergun Caner is a fraud and a "tall tale" impostor? Ask any of your Marines who speak Arabic about how accurate is his use of the language.

Ever heard of "Psalmanazar the Formosan Cannibal"? Well, Caner is just the 21st Century version of Psalmanazar.

It's me, the same Anonymous who just left you a post about Caner being on the "The King is Coming Show" about a month ago.

I just did a search for it to see if I could find a video of the show. The "iTBN" site has a copy of that show with Caner as guest. I believe the show was aired in May 2013. He may have been on more than one episode.

Here is a link to it:
The King Is Coming with Dr. Ed Hindson, Guest Dr. Ergun Caner "The Rise Of The Antichrist".

If that link does not work, try doing a google search for "Ergun-Caner The King is Coming"

Who the freak cares Tom, you need to listen to some Lou Reed maybe you will get it....way too much straw in your blog. The Webelo.

For obvious reasons, I care. Thank you for the mention WD.

This story gets more and more incredible. It really shows the character of Ergun which is anything but honest and repentant as some have claimed.

It also shows that his love of the limlight has caused him to keep this facade going no matter what the price to both innocent Muslims(due to the stereotype) and Christians. In short...he doesn't care. He can attempt to erase his video trail, but maybe the "fake Ergun" can reenact the marine videos. :) It saved my bacon a couple of times. Good job Jason and Dog.

What I getting at Tom why don't you deal with the whole seminary system which got Caner in...you have to shell out over at least 3000 dollars a semester and the mentoring/accountability is way too class based. Caner manipulated the system basically....Webelo

I have seen Hindson on the so-called Campmeeting show that airs several times a day with Mick Murdock and other assorted moneygrubbers so him having Caner on his "show" is not unexpected. Once they associate with themselves with the Campmeeting crowd then I write em off. These guys aren't interested in truth. This is what drives these guys. MONEY

Don't look for any help from Hindson. Ed is a professor at Liberty, and if memory serves me correctly, attempted to keep Caner as seminary president. Hindson and Towns are two of the most influential men at Liberty due to their recognition outside of the school and either one would have had the clout to spin Caner out on his rear.

There is one word that all of this hinges upon -- money. Caner is valuable to these men because of his "ability" to speak "authoritatively" on Islam. If someone else comes along more credentialed and more engaging then Caner then, and only then, will he be dropped.

The "fear" of Islam in the average church has led to a money maker that our wonderful leaders just can't ignore.

I knew Hindson was from the Falwell camp So I expected him to show a little bit more discernment when it came to his association with the Cerullo crowd but I guess they made him an offer that he couldn't refuse.I guess money talks in the preacher business like it does everywhere else. They don't want us to know it but some of us have got this game figured out anyway.

Hopefully this will go over as well as his attempts to overload the internet with spam a few years back. He hired some offshore company to create blogs and write in comment fields the same misspelled Caner-based nonsense over and over, in an attempt to cleanse the record.
What still strikes me is the fact that if Caner had come out at the beginning and admitted to padding his resume, he probably would have been forgiven and the whole issue blown over, but as it is, it keeps growing.

Caner is blocking every video. None of the videos showing his lies and inconsistencies are available online with the same message or just blank screens. I can't find one that will play. All are gone.

Debbie, very frustrating I know, but patience is in order. The truth will prevail. I am posting a new video tomorrow of his recent sermon in Gainesville that shows he is STILL interested in perpetuating the Ergun Caner mystique. I am not interested in calling him to repent, just seeking to warn people.

Good for Bob Allen at Associated Baptist Press. Today he published an article on Ergun Caner's attempt to scrub the Internet of videos, and in so doing Allen gives a great recap of the entire sordid story from the beginning.

The lies told to our Marines by Ergun Caner are absolutely shocking - kudos for Bob Allen shining a light.

My hope is more news media outlets will pick up on this story.

Nope, many videos are still available. Here are four of them. The last one has Watchdog in it.

Caner has not blocked the two from the base theatre and 'O' club that are at Jason's YT channel.

The publication of Allen's story is too funny. It seems to me to be an honest story, but it leaves out all the smoke that EC and friends like to blow.

Without the smoke, the truth of the situation is painfully clear to a much larger audience than old postings by Smathers or Moses Model would ever have reached.

A key issue in these particular videos, unlike others Caner has appeared in, is that they SHOULD belong to the U.S. Government, and are not the personal property of E. Michael Caner. Therefore he SHOULD have no right whatsoever to demand their removal. Hopefully, the lawyers will stress this point.

I thought the name David Gibbs sounded familiar!! Turns out he is the big-shot lawyer that First Baptist Church of Hammond, Indiana bought in to deal with the Jack Schaap situation when that scandal exploded.

Here is a link to a very interesting article about Gibbs: