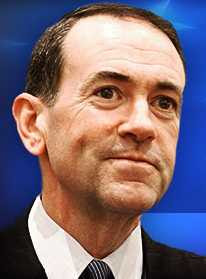 According to the FBC Jax Website, former Arkansas governor Mike Huckabee will be speaking at FBC Jacksonville on the evening of Sunday November 2nd.

We welcome Governor Huckabee to our church and am happy to host him. He has a new show on the Fox News channel that airs on weekends and is getting rave reviews.

However, we hope his appearance at our church won't hurt him in the future. Its very likely that Mac Brunson will use this as an opportunity to advance his own brand - Mac will be on the platform with him no doubt, will introduce him, etc. A great attempt for Mac to bolster his own image. However, I can see in the future when Huckabee runs for president again they will pull out the video of Mac Brunson blaming 9/11, Hurricane Katrina, high gas prices, and the current economic downturn on God and ask Governor Huckabee: "Why did you go speak at a church and take the platform with someone who blames God for America's problems?"

Below is the video once again. Notice that Mac is not just saying that God could use these unfortunate events; not that God can work through these events...no, you will see Mac speaking on behalf of God in the first person, saying that God was actively working to bring all these things about in order to wake up the His people, that God tried to do it with blessings, but is now trying to get our attention through "buffeting" via 9/11, Katrina, gas prices, and economic calamity. Mac traces our current problems back to the Clinton/Lewinsky scandal and our failure to respond appropriately to that, and then God decided to bring 9/11 and the rest.

So when you take the platform with Mac Brunson, Governor Huckabee, keep in mind that the footage of you and Mac will be aired right after the clip below of Mac blaming death, disaster, and calamity directly on God punishing Americans.

WD - I voted for Governor Huckabee in the Florida primaries earlier this year. I am very disappointed that he would speak at a church with Mac Brunson as pastor. Although I identified with with Gov. Huckabee as a believer, his past as a baptist preacher caused me concern because I know how the Mac Brunsons and Steve Gaines operate. Nevertheless, I hoped 'Mike" would be different. The fact he is now appearing with Mac seems to reinforce my inital concerns about baptist pastors who are seeking power. I will be watching your blog closely to see how his visit turns out.

Is there any way to contact the Huckabee organization to find out how much he is getting paid to speak at our church and what his travel and lodging expenses are?

We truly are blessed; another Sunday night we don't have Mac shouting and demoralizing the congregation. Thanks.

Huckabee is specifically being brought in to bolster the Brunson image. Huckabee, fee or not, is a puppet being used to further Team Brunson's agenda.

Did I hear Maurilio shouting instructions in the background, or was it Trey, or both?

If Huckabee wants to continue in basking the "rave reviews from his new gig at Fox News," he should be wise enough to disassociate himself with Brunson. Fox news just might be interested in the association of Huckabee and the infamous, liar and congregate bashing Brunson and his propensity to lying, let alone Brunson's association and close friendship with PP and his disregard of the female race.

What is the big deal?

Huckabee gets hired to speak all over the country...it isn't like he is endorsing the view of the pastor.

I just looked and Huck spoke to Brown University this week...does that make Huck now a liberal?

Huckster doesn't need the grief of being associated with Brunson. I like Huckabee, and would hate to see the libs pull out the Mac Brunson videos and ask Huckabee why he came to preach at a church where the pastor brags about "going fundamental" and putting down people who wear pants to low...and a pastor who blames America's most tragic days in the past 10 years directly on God who CAUSED these things, who actively CAUSED THEM to get our attention.

Huckabee does not need this.

this is EXACTLY why, by the way, that its so dangerous for the Brunsons to introduce the concept of selling promotional time in our church...because this opens the door to ask this question:

If Brunson is willing to sell advertising time in our church, and will allow a company to purchase time on the platform, then its legitimate to ask:

Would Brunson also BUY someone to come in and pay them to DELIVER a message to his people?

If Huckabee comes in and says glowing words about Brunson and our church, and how brave Mac Brunson is...then I will wonder if that is his genuine, heart-felt message, or did Mac and his marketing team decided to bring in Huckabee right before the election to bolster Mac's image?

I have always beem distrusting of preachers that "go political". In my opinion preachers are to be called of God to PREACH GODS WORD, led others to SALVATION, be the SHEPARD of the church. Politics are not part of the job description. So even though Gov. Huckabee seems to be an entertaining personality, obviously he was never called of God to be a preacher!! Preachers truly called to be preachers do not leave the ministry to go into politics. So having Huckabee here to speak, tells me Mac is desperate to draw a big name, but not a called man of God. I remember Dr. Lindsay Sr., saying if a man that thinks he is called of God to the ministry can do any other occupation successfully and with peace, then do it. Because if he is truly called of God into the ministry, God will not LET him do anything else. God has the call on a mans life. Neither Brunson nor Huckabee show the call of God to the ministry on their life. Huckabee left the ministry to go into politics, and Brunson wears the ministry as an ill fitting suit. You can tell when a man is a true preacher and when he is out of step, in the wrong profession. Huckabee found his position. Mac is still floundering.