Thanks Be Unto Our Pastor 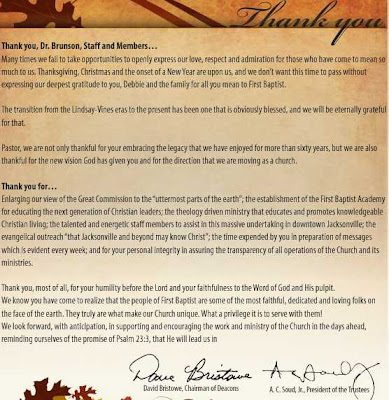 Oh my..."humility"? The guy is the picture of arrogance every week in the pulpit. This makes me wonder, who is writing this letter? This is a letter written to counter the claims on this blog..."they say he's arrogant on the blog? He slandered Sheri Klouda and doesn't have the humility to simply apologize to us for using our pulpit to speak ill of a woman who has suffered greatly. Let's put in the letter saying that MOST OF ALL we are thankful for his humbleness." Give me a break."
We know you have come to realize that the people of FBC Jax are some of the most faithful, dedicated, and loving folks on the face of the earth."
Dave and Judge Soud, you left off Mac's descriptions of us as the "most legalistic, most past worshipping, biblically illiterate, scared, frightened, unloving, poor listeners, 'sitting and not doing what the pastor says'..." and so many other things that pastor has accused us of, both in the pulpit of FBC Jax and out of it. He "built a case" against us to tell us just how sorry we had become right before Chest of Joash, then followed that with a sermon to tell us HOW AWESOME HE IS IN ALL THE INITIATIVES HE HAS BROUGHT. All you have to do is watch his preaching and his condescension towards us and its so obvious to see how little he cares for his congregation and what his low view of us is.
So there you have it...another manipulation technique...let's use "Thanksgiving" as a way to express "Thanks" - not to God but to the pastor for being the great wonderful leader that he is accused of NOT being on the blog. The only problem is this: just saying something, and putting it on the FBC Jax website doesn't make it so. We are much smarter than Mac, Honey, Dave, and Judge Soud give us credit for.
Much smarter.
Posted by FBC Jax Watchdog at 11:26 PM

Luke 20:46: " Beware of the scribes, which desire to walk in long robes, and love greetings in the markets, and the highest seats in the synagogues, and the chief rooms at feasts; Vs.47: Which devour widows houses, and for a show make long prayers; the same shall receive greater damnation".

James 2: 2, 3 & 4(a) "For if there come unto your assembly a man with a gold ring, in goodly apparel, and there come in also a poor man in vile raiment; Vs.3: And ye have respect to him that weareth the gay clothing, and say unto him, Sit thou here in a good place; and say to the poor, Stand thou there, or sit here under my footstool: Vs. 4 (a) Are ye not then partial in yourselves".

The pastor at FBC Ocala resigned yesterday. Read about it here. I blogged about this story and its relevance to our church. I recommend after you read today's article about the resignation that you go back and re-read my blog article.

Pray for Dr. Sullivan, as reports are that he will be at the church this Sunday to try to help the church put back the pieces after this very devisive preacher finally has left.

I found this site a while ago, that deals with spiritual abuse. Cindy Kunsman authors this blog.

Spiritual abuse describes the process by which a spiritual authority misuses their power and the trust of their flock in order to meet their own needs or the needs of an organization or ideology. Many churches with sound and solid Biblical doctrine can be considered "cultic" when they practice techniques of manipulation and thought reform. Please read here concerning the many different aspects of this type of manipulation and spiritual abuse including development, practice and recovery from the phenomenon.

For readers who wish to arm themselves with weapons to counteract spiritual abuse and cultic behavior, please check out these following links:

under much grace blog by Cindy Kunsman

Grace and Truth to You: Showing posts for query Cindy Kunsman

Robert Lifton describes eight signs of a cult in his book "Thought Reform & the Psychology of Totalism:"

Milieu control: control of the group environment and communication. (Dissent or disagreement within the group is not allowed).
Manipulation: Leaders are perceived as being chosen by God, history or some supernatural force. (There can be no questioning of God ordained authority in the leadership of the organization).
Purity demands: An us vs. them mentality is developed, in which cult members are the only pure and good. (Questioning the morality injunctions of leadership is questioning the integrity of the organization).
Confession: group confession and self-criticism is used in order to produce personal change. (The individual is never right, only the group).
Sacred Science: The cult's doctrines and ideology are considered sacred and must not be doubted or questioned. (To question is a sign of a lack of spirituality and discipline).
Loading the language: Conventional words and phrases are given special, in-group meanings. (Concepts such as 'holiness' and 'righteousness' are defined by group definitions).
Doctrine over person: Members are conditioned to feel guilt if they ever question group doctrine. One must conform to the "truth," as taught by the group. (A lack of conformity to group doctrine prompts questions of legitimacy and ultimately expulsion).
Dispensing of Existence: The group contains the elite; outsiders are evil, unsaved, and may not even have the right to exist.

The above was pulled from Wade's blog post here that I also linked earlier two posts ago.

Amazon.com: Thought Reform and the Psychology of Totalism by Robert Lifton

Google.com: Thought Reform and the Psychology of Totalism By Robert Jay Lifton

Did it ever occur to anyone that the pastor may have been right and some of the members wrong? Just wondering since noone seems to know the whole story.

Be sure and read the Ocala account closely because that's probably what will be happening at your church.